© 2014-2019  Calling Out Community and CallOut Films – a counter-culture collective of Christian conservatives utilizing every social media tool possible to communicate the truths about God, His created universe and mankind that the Devil and liberal Left individuals, corporations, governments and mainstream media outlets don’t want you to hear.

©2014-2020 Calling Out Community / CallOut Films. Ready 'N Steady... ‘Til He Comes™ The Calling Out Community is a counter-culture collective of Christian conservatives utilizing every social media tool possible to communicate the truths about God, His created universe and mankind that the Devil and liberal Left individuals, corporations, governments and mainstream media outlets don’t want you to hear.

Great Britain is now beginning the process of divorcing from the European Union and going on its own – something it’s quite capable of doing, having built an Empire, then a Commonwealth, with impact around the world,  that has lasted 1,000 years.  Now a new trade deal is being considered between four very old and dear friends – family members actually – and it’s starting to get a lot of interest among the citizenry of those four countries.  It might just be the best idea any of the four has ever been part of!
The proposed union even has an unofficial name, already becoming comonplace – CANZUK:  the Canada-Australia-New Zealand-United Kingdom trade bloc. There is even a website currently promoting the idea to all four national governments and their citizens – all four of whom are in various stages of development of the idea already:

I believe strongly that the United Kingdom/Great Britain would indeed be best served by joining with these particular member states of the current British Commonwealth, to form a new trade bloc, like the EU – Australia, New Zealand and Canada (FULL DISCLOSURE: I was born I, and have lived all of my 51 years, as a citizen of Canada). 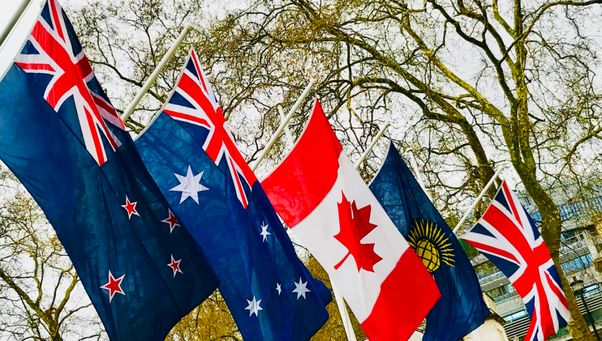 The personal, professional, business and national connections between these four particular countries are incredibly deep. Of course, this is because we are family, as I stated previously – Great Britain being our mother, and the other three nations (Australia, New Zealand and Canada) being sisters, who to this day very much love and respect one another.

The trust and credibility built between these four nations goes all the way back to our individual founding as colonies of the British Empire, and now member sovereign states of the Commonwealth. The daughter states are all within 44 years of being the exact same age:

These four nations fought through two World Wars, the Great Depression, and a host of other challenging times… side by side.

We share Her Majesty, Queen Elizabeth II as our common monarch. A shared monarch is an essential aspect of CANZUK, which represents a global institution which has played an important role as a symbol of a common heritage and parliamentary tradition.

The Crown is the cornerstone of our democratic governments, and the rule of law over a long history of peaceful constitutional development. It is instructive to note that the English speaking countries which have retained the monarchy have been far more successful in avoiding civil unrest than their republican counterparts such as France and the United States.

The four nations have the same Parliamentary governmental system, a similar Constitution, and are all members of the British Commonwealth. We have similarly-ranked and recognized educational institutions, as well as similar trends in the business and financial realms, and similar geopolitical aspirations. The four nations also have, for the most part, the respect and trust of the majority of the nations of the world.

Interest and support is already high in all four nations for such a trade bloc agreement: 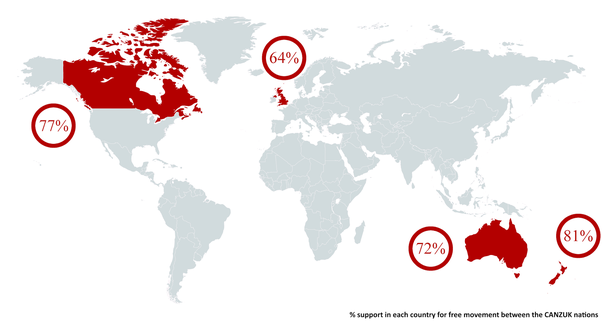 National Support by Region (in %): 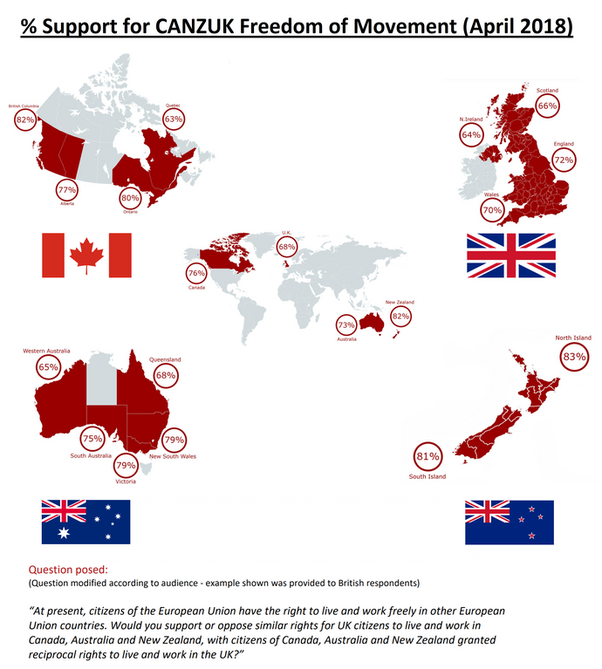 We have a similar racial profile, speak the same language (with some various differences that only make things more interesting). Canada, Australia and New Zealand even share a similar currency with a near-identical value – the Dollar. For example, on October 2, 2019 (information provided by Google Finance)

With the United Kingdom “Brexiting” the European Union trade bloc and going on their own, this idea has gained newfound interest in the UK, and across the other three nations as well.

This concept of a trade bloc consisting of the United Kingdom/Great Britain, as well as Canada, Australia and New Zealand was discussed in a February 13, 2017 Financial Post article, which I will quote verbatim for some excellent updated information. – In the Trump era, the plan for a Canadian-U.K.-Australia-New Zealand trade alliance is quickly catching on:

Erin O’Toole, one of the candidates for the Conservative Party leadership, has made one of the key planks of his campaign his determination to “pursue a Canada, UK, Australia, New Zealand trade and security pact.” The idea of creating a “CANZUK” zone of free trade and free movement of labour is catching on elsewhere, too.

In New Zealand, the junior coalition partner in the government, the Act New Zealand party led by David Seymour (who himself worked for five years in Canadian politics), is explicitly in favour of free movement and free trade within CANZUK.

In official party circles within the U.K. and Australia, the wheels are grinding a little slower, but the former Australian prime minister Tony Abbott is already into most of the idea, proposing a free-trade agreement and free-movement area encompassing Australia, New Zealand and the U.K. And in Britain, Theresa May’s Conservative government has made it clear it wants new trade agreements with Canada, Australia and New Zealand as soon as possible after it leaves the EU.

The idea of CANZUK begins with a free-trade agreement, free-movement area (the freedom to live and work in each others’ countries) and defence-partnership agreement. O’Toole favours all three of these main planks, and he’s right that it all makes perfect sense.

The post-Cold-War alliances are obsolete. NAFTA is dead. The EU is losing a key member.

The CANZUK countries, working closely together, would make a formidable contribution to world affairs. They would have the largest total landmass of any free-trade zone. They would collectively constitute the fourth-largest market in the world, after the U.S., EU and China.

Their combined military spending would be the world’s third largest, well ahead of Russia, and on European Geostrategy’s geopolitical power index, the CANZUK countries collectively have a strength around 70 per cent of that of the U.S. — and nearly twice that of China or France. With a combined global trade footprint nearly twice as big as Japan’s, the CANZUK countries would have substantial influence in opening up global markets and guiding global regulation across a range of issues from banking to shipping to the environment.

What makes CANZUK a natural union is perhaps self-evident. Canada, the U.K., Australia and New Zealand share a similar culture, similar values, and analogous legal, business and social systems that allow us to get along easily and interchangeably. (The term CANZUK was originally a term diplomats used to refer to these four countries because of how frequently they would vote the same way at the UN.)

Most of the main issues our political parties focus upon are instantly comprehensible to anyone from another CANZUK state. Our laws and constitutions share many features, making trade deals and mutual regulatory recognition a relatively straightforward matter. Our citizens enjoy a roughly similar per capita GDP (which is just not true of the other Commonwealth nations with similar constitutions) and face few hurdles in integrating into another CANZUK country’s labour market. Our societies are peaceful and orderly.

And in our modern globalized world, we see that we are much more similar to each other than we are to others. The challenges of dealing with Japanese or Chinese business partners can be overcome, but they cannot be denied. Continental Europeans have different foibles, different goals and different priorities from ours, as well as importantly different legal and constitutional challenges. The arrival of President Trump reminds us of just how different from us many parts of the U.S. really are, and always have been.

Furthermore, while the U.S., the EU and China can all make valuable trading partners in their different regions, each CANZUK state that encounters them is regionally overmatched and, standing alone, will inevitably be dominated. Working together though, exploiting our natural affinities and the world of mass communication, high-value services and rapid transit, CANZUK can allow us stand our ground and project our own values and agendas.

The post-Cold-War alliances and assumptions are obsolete. NAFTA is dead. The EU will soon lose one of its largest members. Trump might downgrade NATO, abandon the WTO and even diminish the UN. It’s tempting, in a world of change, to try to cling to as much of the old certainties as possible. But if we look up and out, something new beckons. Free trade, free movement and a new security partnership between countries of shared culture and natural affinity. CANZUK is the global deal of tomorrow.

Dr. Andrew Lilico, born in New Zealand but based in London, is executive director and principal of Europe Economics, a fellow of the Institute of Economic Affairs, and chairman of the IEA Monetary Policy Committee.

©2014-2020 Calling Out Community / CallOut Films. Ready 'N Steady... ‘Til He Comes™ The Calling Out Community is a counter-culture collective of Christian conservatives utilizing every social media tool possible to communicate the truths about God, His created universe and mankind that the Devil and liberal Left individuals, corporations, governments and mainstream media outlets don’t want you to hear. View all posts by Calling Out Community