There is an uncrossable gulf that separates how much value the Western media and leftists hold for Muslim victims of terror, that were not caused by the Church, and Christian victims of terror caused by Islam.  That has been made painfully clear in the last month, and especially after the horrific terrorist attacks on worshipping Christians on Easter Sunday in Sri Lanka.

It’s time to speak up about it.

One only has to look at the coverage this week of the Islamic terrorist attacks in Sri Lanka versus the insufferable barrage of inane nonsense that came out of New Zealand after the so-called mosque shooting there, to see just how much the media and leftist jackasses overvalue the death of a Muslim at the hands of non-Christian extremists, over the death of many more Christians at the hands of Muslims.

The mosque shooting in New Zealand was met with national mourning and a pandering prime Minister that wore Islamic clothing more than she wore her own pants suits that week. Giant ceremonies were held where the whole country could come together, as long as they were weeping and gnashing their teeth because of the Muslim “victims” there. 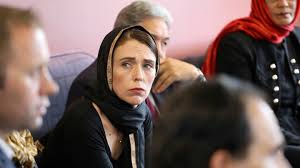 Prime Minister Jacinda Ardern seems to be looking to see if the media are watching her weeping performance? What an insufferable witch – only days after this shooting, her government would claw back many categories of previously legal firearms, which wouldn’t have changed anything in this situation..

Fast forward to the disaster in Sri Lanka on Easter Sunday, when Christians were brutally murdered by the hundreds while they sat in church on our holiest day of the year – their only crime being their celebration of the resurrection of the living Saviour.

And what was the public’s response around the world? All I heard was crickets chirping. I DON’T RECALL SEEING ONE WORLD LEADER SPEAKING OUT ON THIS AT ALL.

And in the most outrageous slight possible, ABC News ran one constant video clip in Sri Lanka of a Muslim woman kneeling on the street weeping about it afterwards. That’s it – that was the sum total of their reporting of public response.

Frankly I don’t give a damn what their responses to this event are – those Islamic pigs COMMITTED THE CRIME.

A mass funeral on Wednesday near St. Sebastian’s Church in Negombo, Sri Lanka. About 100 people were killed at the church on Sunday. (Credit: Adam Dean/New York Times

While 359 people were killed and over 500 were injured by Muslim terrorists in 8 separate attacks in Sri Lanka, including hundreds of Christians killed in Church only, the liberal elite continues to pander to the poor little Muslims in this so-called NZ mosque shooting. Tonight, as we speak, Prince William of the royal family is in New Zealand to support the victims there.

Meanwhile, to add insult to injury band slaughter, the media continues to report that these ISIS butchers perpetrated these attacks as retaliation for the mosque shooting – though NO Christian, NO church and NO Sri Lankan had anything to do with that fake news gun grab committed by the libtard government in New Zealand.

An image released by Isis’s propaganda agency Amaq of a group of men it says carried out the Easter Sunday attacks in Sri Lanka (Credit: AFP)

LET ME SAY IT AGAIN – The media and leftists have the unmitigated GALL to actually try to STILL get public sympathy for the Muslims shot in the New Zealand mosque … by painting the Sri Lankan attacks as REVENGE KILLINGS.

THAT WOULD BE THE SAME THING AS THE UNITED STATES LAUNCHING AN ATTACK ON VENEZUELA IN RETALIATION FOR THE JAPANESE BOMBING IN PEARL HARBOR. The two events do not have a damn thing in common, other than Muslims were responsible in one and supposed victims in another.

For an unplanned event, there was certainly a quick graphic design response across Western media.>/small>

Hell, liberals and media are even trying to justify the attacks on Sri Lankans as if they deserved it for the attacks in New Zealand.

If the truth be told, and I’m not even going to bother being sensitive about this, Muslims died in the mass shooting in New Zealand because they have committed 35,899 terrorist attacks around the world since 9/11 and people are fed up with them. The Muslims who were killed in that shooting in New Zealand were perhaps innocent victims, though we don’t know what kind of impact they have had on the terrorist attacks around the world by financing some of these organizations or what their support for Islamic terrorist groups is.

However, the Sri Lankan victims were all absolutely innocent parties that had no ties to any other attacks like this anywhere in the world.

Crocodile tears coming from demons shouldn’t be such a surprise.

Frankly I no longer feel one bit sorry for any so-called victims of the mosque shooting in New Zealand. With no due respect, the score is now 35,889 Islamic terrorist attacks to 1 attack back at them. In fact the very week of the New Zealand shooting, which was perpetrated by a white supremacist NOT claiming to be a Christian of any kind, Nigerian Muslims attacked several churches there and killed at least as many Christians…

Now, ABC news reports that the Sri Lankan attacks represent the largest attack by ISIS ever in the world. In fact it is rivalled only by September 11th as one of the largest terrorist attacks in recent memory. Certainly the media are reporting the Sri Lankan story now for several days, just as they did with the New Zealand shooting.

But they have to, don’t they, because it’s the largest terrorist attack by ISIS in history.

The difference? Where’s the public outcry?

I don’t see that insufferable shrew of a New Zealand prime minister weeping about this situation, even though SEVEN times more innocent people died on Easter Sunday in Sri Lanka then died in the mosque shooting in New Zealand. 7 TIMES MORE. Apparently, 1 dead Muslim is worth at least 7 dead Christians, according to these idiots.

That could very well be due to the fact that there been so many Christians killed in churches and Jews killed in synagogues by Muslim butchers around the world… In France, Egypt, Israel, Indonesia, Kenya, the Philippines, Nigeria, India, and many more – and now Sri Lanka… everyone just shrugs now.

Well I sure as hell am not shrugging. I boldly declare that I HATE ISLAM WITH A PASSION. I didn’t say I hate Muslims, but DO NOT push me on it, while Christian blood runs through the streets of yet another innocent country because of Muslims.

I wish we could outlaw Islam – the blood cult, demonic false religion, and scourge on society – as the international terrorism group they are. I would love to see the Pope declare a return to the Crusades and a reinstatement of the knights Templar – but he’s such a weak-as-water little delicate socialist princess in full collusion with Islam, that would never happen.

However, if Muslims think they can continue to slaughter Christians around the world by the thousands, they shouldn’t be surprised when some of us in the Church begin to FIGHT BACK. Jesus may command us to “turn the other cheek” – but Muslim mongrels should not take that as a sign of weakness. We may just be avoiding looking at them as we LOCK AND LOAD to defend ourselves against them.

Muslims should have no doubt about our resolve to defend our families, defend our Brothers and sisters in Christ, defend our churches – no matter WHAT that means. And it won’t be a “measured response” either, if we are forced to retaliate. ISLAM HAS DECLARED WAR, and if they want to be martyrs for their cause, and the Church is attacked again – we’ll WIPE THEM OUT and let God sort them out after.

“Over the top, you might say”? How about you just SHUT UP, who pandering TRAITOR, grab a mop, make yourself useful and start cleaning up all the blood on the street in Sri Lanka. When you finish there, you can start in the streets of Egypt, France and a host of other countries that these Muslim butchers have been shooting and killing people in.

And then you can walk over to the neighborhood mosque and tell the illiterate imams there to stop preaching violence against our people – or suffer the consequences when their equally mentally retarded congregations do as they are encouraged to.

By Islam Rising, Founding Blog Member
Calling Out Community
Posted April 25, 2019
[God’s Got A Plan For You!]