Palestinian children hold up red cards during a protest during the arrival of FIFA president Blatter to his Jerusalem hotel on May 19. (Credit: Reuters/Ammar Awad)

This week’s nonsensical bid by the Palestinians to ban Israel from FIFA – the world soccer body – once again highlights how tired and short-sighted the Palestinian Authority really is.

Fortunately, at the midnight hour, just before the vote on their request would have taken place at the FIFA General Assembly, the Palestinians Eregained their senses and withdrew the request.
Regardless, this stupid policy continues in step with the Palestinians’ constant push worldwide to “boycott, divest and sanction” (BDS) Israel, which (according to an excellent article by Carrie Sheffield in Forbes magazine) has had “limited impact on the credit profile of Israel, yet it directly harms its intended beneficiaries, the Palestinians“.

This BDS movement has been propogated by left-wing lunatics at universities, left-of-centre political parties, unions, and even some mainline Christian denominations (to the chagrin of many congregants), such as:

“The impact of BDS is more psychological than real so far and has had no discernible impact on Israeli trade or the broader economy. That said, the sanctions do run the risk of hurting the Palestinian economy, which is much smaller and poorer than that of Israel, as seen in the case of SodaStream.”

SodaStream is an Israeli company that manufactures DIY carbonated beverage machines and flavoured syrups – which can be purchased at Bath, Bed and Beyond and other North American stores.  The company recently shut down a West Bank factory and moved it to southern Israel, cutting hundreds of jobs for Palestinians that reportedly paid between three and five times the average local wage.

SodaStream’s CEO Daniel Birnbaum denied the move was BDS-related, but its profits tanked after BDS activists locked the carbonated soda maker in their crosshairs:

“It has nothing to do with politics; we’re relocating to a modern facility that is three times the size,” Birnbaum told The Independent. “But if it was up to me, I would have stayed. We showed the world Arabs and Jews can work together”. (emphasis ours)

Israel and Palestinian flags fly side by side

The numbers speak for themselves:

Oh, but that’s because Israel keeps the downtrodden Palestinians poor and destitute under their iron rule, you may say.  Let’s break past the myths – According to the Bank of Israel:

The Balance of Trade in Palestine is reported by the Palestinian Central Bureau of Statistics, whose numbers seem to be even more telling than the Bank of Israel’s assessment: 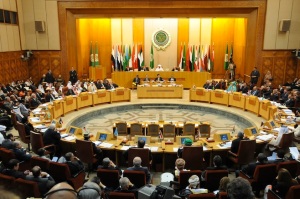 Arab League countries do very little trade with Palestinians – is it any wonder, when Palestine badmouths its largest trading partner so brutally in the press?

Full stop.  Read that list of trading partners again.  For the bluster and vocal support that militant Islamic countries have for Palestinians and against Israelis, it doesn’t seem to translate into dollars spent out of the oil-soaked wallets.  In other words, they like to propogate the story that the Palestinians are all poor, pathetic victims of the big bad Israel, and use them as pawns in their media campaign against Israel.  However, they wouldn’t actually be caught dead doing trade with the Palestinians.  Get real, they have international reputations to uphold, don’t you know?

These numbers also tell another story that the loonie left in the Western media and all these pinko academics and union leaders in the “Boycott Israel” movement don’t and won’t tell you – in 2012, Palestinian sales to Israel accounted for about 87.5% of Palestinian exports, but only about 1% of Israeli GDP.  Translation?  If Israel stopped buying from Palestinians today, Palestinians would all be starving to death tomorrow – and it would have zero impact on Israel’s bottom line.

But perhaps you missed the most outrageous hypocrisy, completely evident in their own published numbers.  It’s something the Palestinian Authority wouldn’t dream of highlighting in the Boycott Israel press conferences – yet their own Palestinian Central Bureau of Statistics (PCBS) reports that Palestinian imports from Israel accounted for 2/3 of their total worldwide imports, and 27% of the Palestinian GDP.

I’m sorry, say that again?  Are these not the same people who are the poster children for Boycott Israel?  Can someone explain to me why they rely on Israel to buy their stuff, which even their militant Islamic friends won’t do, AND they make the great majority (2/3) of  their own purchases from Israel?

Now, you aren’t going to see any of this mentioned in the New York Times or on CNN.  Why?  Because this “truth” nonsense blows holes in their image of Israel as the schoolyard bully, beating up Palestinians for their milk money.  In fact, Israel not only gives them their milk money (and up to 5 times more of it than Palestinian companies pay to their own citizens for equivalent work) but then Israel sells them the milk too!

Rocket attacks against Israel, since the withdrawal of Israel from the Gaza Strip in 2005. Photo Credit: Israeli Defense Forces

Palestine supporters argue that Israel puts restrictions on what they can purchase and from what countries.  Really? Because somehow they were able to purchase 10,000 rockets from other countries in the last decade, that Hamas then launched on Israeli towns and cities.  If they can buy rockets from their neighbours, surely milk, eggs and bread shouldn’t be that difficult!

Sometimes, leftwing lunatics just can’t handle the truth.  You’ll never hear them say this, so let me speak on their (unapproved, I’m sure) behalf: Palestine needs Israel, period. And at the same time, Israel does not need Palestine, period.  Yet the BDS crowd would impair economic ties between these areas, when clearly the only loser in this scenario would be the Palestinian people.

Forbes magazine also points out that there is  “evidence that trade between peoples lessens outbreak of war”.  Palestine could use a lot less war – and they could also use jobs.  Their own Palestinian Central Bureau of Statistics (PCBS) again reports that: “the unemployment rate decreased from 29.3% in the 1st quarter 2014 to 28.9% in the 2nd quarter 2014.”

28.9% general unemployment!  The PCBS also reported that the number of Palestinians employed in Israel and Israeli settlements was about 109,400 (27.6’% of their total workforce) in the 2nd quarter 2014.  So they have an incredibly high unemployment rate, a good percentage of their total workforce works for Israeli companies – and they want to boycott these same companies, while still selling the majority of their goods to Israel, and buying the majority of their daily needs from Israel, as their #1 trading partner?  What rubbish. 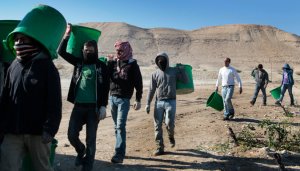 There are [16] …industrial zones…in territory Israel seized in the 1967 war. They have about 1,000 plants — sophisticated aluminum and food manufacturers as well as tiny textile and furniture workshops — that pump roughly $300 million into the Palestinian economy through salaries.

These are Israeli factories that were built specifically near Palestinian territories, so that they could hire Palestinians. Yes, but at slave-labour rates, some may sniff.  Nope.  Despite overheated BDS rhetoric about exploitation, last year the Palestinian Authority’s official newspaper hailed working conditions for Palestinians employed by Israelis in West Bank settlements. It also scolded Palestinians hiring other Palestinians for low wages with no benefits.  In fact, the September 21 Al-Hayat Al-Jadida article, translated by Palestinian Media Watch, said that:

“whenever Palestinian workers have the opportunity to work for Israeli employers, they are quick to quit their jobs with their Palestinian employers – for reasons having to do with salaries and other rights.” 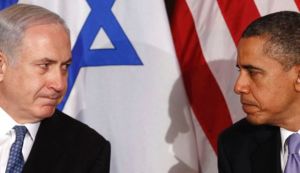 What?  They would leave the homeland and work for their brutal oppressors?  Does this seem logical? It is, when you realize that the real logic isn’t shown in Western media reports.  We instead see groups like the American Library Association, along with the United Church of Christ and the Episcopal Church, who continue to foster this misguided Holy War against Israel. Throw in White House and congressional Democrats who (against the will of most Americans) ungraciously snubbed Israeli Prime Minister Benjamin Netanyahu during his U.S. visit recently. And a nuclear Iran, a regime vowing ethnic cleansing against Jews, grows more likely each day as Secretary of State John Kerry dithers.

Through all this, Israel grows increasingly vulnerable, even as it continues to economically bolster Palestine. Israel invests heavily in Palestine; the rest of the world doesn’t bother.  And the Palestinian Authority continues over and over again to intentionally bite the hand that feeds it. 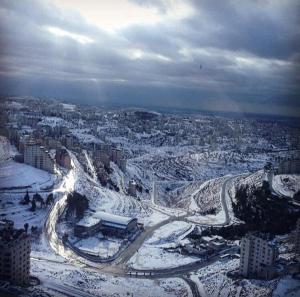 The night the lights went out in Gaza – for 45 minutes. (Credit: Elia Ghorbieh)

Are the Palestinian people so hard done by?  The Western media wants us to think so, with dramatic headlines like those on February 24, 2015 that screamed: “Israel turns off power to hundreds of thousands of Palestinians in the dead of winter“.

Yep, it was true.  Why?  According to the spokesman for the Israel Electric Corp.:

The Palestinian Authority owes the IEC — meaning the paying consumers — nearly 2 billion Israeli shekels [about $500 million].  A year has passed since I said this last and nothing has changed. Starting today, we will begin restricting electricity.” (emphasis ours)

This was one of the asinine Palestinian Authority targets for the Boycott Israel campaign – “let’s just not pay our power bills”, they told the people.  By the way, the power company turned out the lights for a grand total of… 45 minutes.  It’s doubtful their houses would have even cooled down in that much time, unless they kept all the windows open.

How draconian of Israel, when they were only owed $500 million for a year.  Let the Palestinian Authority freeze in the dark, I say.  Pay your bills or shut the hell up.  Better yet, maybe the Palestinian people would be wise to get rid of the idiots that told you to do this in the first place. 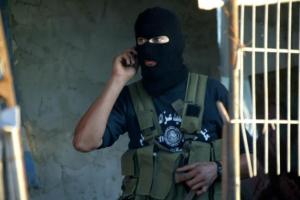 The next time you think you are supporting Palestinians (and hurting Israelis) by boycotting Israeli companies and products, think again.  You are doing true harm to those you think you are helping, and you are aiding and abedding in the Palestinian Authority’s continued harming of their own citizens with this nonsensical policy of slitting their own economic wrists.  No wonder no one wants to be a serious trading partner with them, unless considering for humanitarian reasons.

Time for less rhetoric and more reality. Palestinians need jobs, and a secure government that doesn’t lead them straight to the gates of Hell itself.  Israelis offer them jobs and peace and security.  Palestinians need people to buy their products – Israel does that.  Israel also sells them all the things they need to survive, including their cell phones and satellite dishes.  They even give them a year to pay their power bills.

Enough is enough.  If you agree with me, stop supporting terrorist activities and campaigns – buy “Made in Israel” products today.  Look for a UPC code that begins with the numbers 729 as shown, or check out these sites: