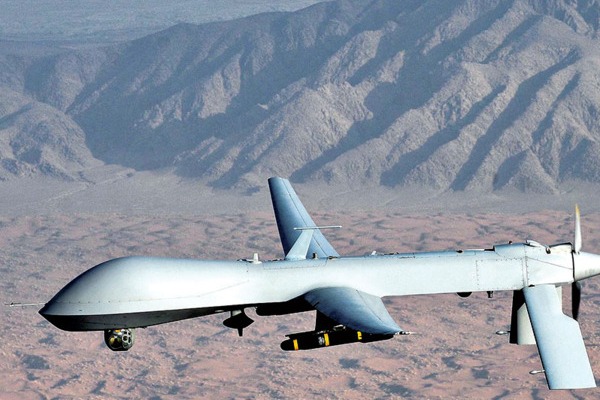 The ISIL #2 Leader, Fadhil Ahmad al-Hayali, killed this week by a U.S. drone

“Fadhil Ahmad al-Hayali, also known as Hajji Mutazz … was killed in a U.S. military airstrike on [Tuesday, August 18, 2015] while travelling in a vehicle near Mosul, Iraq, along with an ISIL media operative known as Abu Abdullah. 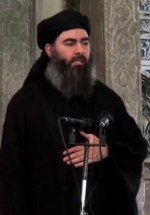 According to the U.K.’s Daily Mail, He was seen as ‘senior deputy’ to ISIS leader Abu Bakr al-Baghdadi, and had reportedly been involved in the offensive that led ISIS to capture Mosul, Iraq last summer.  He also was allegedly involved in moving large numbers of weapons and supplies and people between the organization’s strongholds in Iraq and Syria.

Price said that the militant was involved in the terrorist group’s ‘finance, media, operations, and logistics,’ according to the Wall Street Journal.

A U.S. unmanned drone, much like the one pictured, has killed the deputy leader of the ISIS / ISIL group. (Credit: Kirsty Wigglesworth/Associated Press)

…intelligence officials said that multiple ISIS leaders had been killed in airstrikes including a man called Haji Mutazz. At the time the militant, believed to be from the northern Iraqi town of Tal Afar, also reportedly went by Abu Muslim al-Turkmani.  Chairman of the Joint Chiefs of Staff [General Martin Dempsey] also erroneously cited the death at the time, according to NBC News.

A US official told NBC News on Friday [August 21, 2015] that Dempsey either misspoke or was misquoted in December. A source also told CBS News that the ISIS member [killed in December] was not the group’s ‘number two’, but was still a very significant figure to the group in Iraq.

The Defense Department said in December that Mutazz had previously served time at the former U.S. military prison Camp Bucca, located on the Kuwait/Iraq border.  The infamous camp (named for Ronald Bucca, a Fire_Marshal who died in the September 11, 2001 terrorist attack) was reported by the U.K.’s The Independent newspaper to have detained some of the Iraq War’s most radical jihadists. 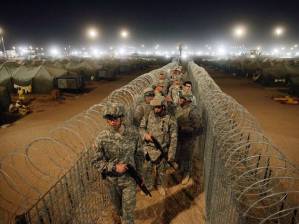 Former U.S. military prison Camp Bucca, now shut down in 2009 by the Obama administration. 90% of its inmates are again fighting for ISIS

On 17 September 2009, only 8 months after Obama was sworn in for his first term as President, the US military announced that the prison camp would be closed.  Hundreds of the remaining inmates at that time were freed, 90% of whom created the group ISIS.  In fact, current leaders of ISIS / ISIL were held at one time in that camp.  No wonder then that The Independent’s entitled their feature article on this prison camp “The US prison that became the birthplace of ISIS“.  Thank you, Obama team, for that brilliant move.

Mutazz had previously served as a lieutenant colonel in Saddam Hussein’s Special Forces and was believed to have been involved with Al Qaeda at one point as well.  What a resume.

Rest… In Pieces.  One more martyr for ISIS – one more resident in Hell.