UPDATE:
North Korea is threatening the United States with a nuclear assault on the island territory of Guam, as it continues to bluster with President Trump and flex its newly developed missile muscles. President Trump has threatened that any military action on any of the U.S. territories or allies will be met with “fire and fury unlike anything has ever been seen before”. Stay tuned.

Check out our videos on this subject:

ORIGINAL POST: March 4, 2016The BBC reported on March 2, 2016, that the United Nations Security Council has unanimously adopted a resolution significantly expanding international sanctions against North Korea. Correspondents say the new measures amount to some of the toughest against North Korea in two decades. The vote is in response to North Korea’s nuclear test last month.

We thought it would be interesting for our readers to learn a few of the more interesting things about North Korea, that we doubt CNN is going to tell you. 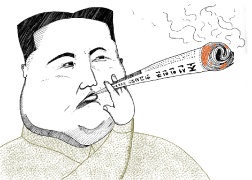 (Credit: Vice)Marijuana is completely legal in North Korea. That actually explains a lot. In fact, it’s not even considered a drug in the secretive dictatorship. The Huffington Post reported that defectors, visitors and experts have all testified that North Korea either has no law against the sale and consumption of weed, or it has a law that is largely unenforced. NK NEWS receives regular reports from visitors returning from North Korea, who tell of marijuana plants growing freely along the roadsides, from the northern port town of Chongjin, right down to the streets of Pyongyang, where it is smoked freely.

Night Lights of capital city Pyongyang, North Korea. (Credit: Robert Harding World Imagery)Pyongyang, the capital city, has only 100,000 visitors per year, and most of them come from neighbouring China. However, tourism is now sanctioned by leader Kim Jong-un, and they have grand targets to reach out to 1 million people by 2017 and 2 million by 2020. Seems ambitious for a country that treats most travellers like possible terrorists. And the world’s #1 most visited city? Bangkok, Thailand, with 15.98 million visitors, according to the annual listing by Forbes magazine.

James Dresnok, America’s last defector. (Credit: BBC Four)Six American soldiers defected to North Korea in 1962 and have lived there ever since. “I was fed up with my childhood, my marriage, my military life, everything. I was a goner. There’s only one place to go,” said James Dresnok, the last US defector alive in North Korea, who recently spoke to the Guardian newspaper. In August 1962, he stepped into the minefield and crossed over to North Korea.

Eventually, there were four of them: Abshier, Jerry Parrish, Charles Robert Jenkins, and Dresnok. The men lived together and participated in several propaganda efforts on behalf of the North Korean government. They appeared on magazine covers and used loudspeakers to try to persuade more American soldiers at the border to defect. However, at first, they did not wish to remain in North Korea indefinitely. In 1966, the four men tried to leave North Korea by seeking asylum at the Soviet embassy in Pyongyang but were immediately turned over to North Korean authorities by the embassy. Afterwards, Dresnok decided to settle in North Korea and assimilate. He married a couple of times and is currently in failing health.

(Credit: Original oil painting by artist Richard DeRosset for USS PUEBLO crew member Tom Massie)North Korea is the world’s only nation to currently have a captured U.S. Navy ship. On January 23, 1968, in international waters more than 15 miles from North Korea, the USS Pueblo, an electronic intelligence ship, was surrounded by sub chasers and torpedo boats, with MiG jets overhead. The sailors on the Pueblo were rounded up and put in prison camps. While the North produced propaganda footage showing fair treatment, the reality was much worse. The crew endured starvation and torture for nearly a year. Eventually, the North Korean government decided to release all crew members. The Pueblo is still held by North Korea and remains the second-oldest commissioned ship in the U.S. Navy.

(Credit: Official Website of the Democratic People’s Republic of Korea)North Korea is officially NOT Communist anymore. In 2009, references to Communism were removed from the country’s constitution, and “Juche” became the official state ideology, replacing Marxism–Leninism when the country adopted a new constitution in 1972. Created by Kim Il-sung, it states that the Korean masses are the masters of the country’s development, with an emphasis on political, economic and defensive self-sustainability. 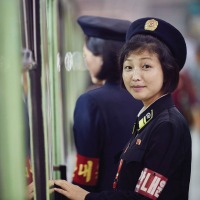 2016 North Korea Wall Calendar – “Dispatcher readies a Pyongyang train to depart” (Credit: NK News)It’s not 2016 in North Korea. The year is 105! The Juche Calendar was introduced in 1997 and is based on Kim Il Sung’s date of birth: April 15, 1912. That year was referred as Juche 1 and the system works forward from there, while it maintains the Gregorian Calendar’s traditional months and the number of days in a month.

In many instances of non-Korean usage, the Juche year is given after the corresponding Gregorian year, i.e. 12 June 2007 (Juche 96). However, most official DPR-Korean sources list the Gregorian year second, as in 12 June Juche 96 (2007).

(Credit: BusinessInsider.com)North Korea has the World’s Largest Stadium, seating 150,000 people. The leaders of the country aim to prove North Korea’s might through its architecture, most of which is made of bulky concrete. That includes the May Day Stadium, a colossal structure built in 1989 and remodelled in 2014 that seats 150,000 people. It is the largest stadium by capacity in the world. While it hosts some soccer matches and general athletic competitions, May Day’s grandest and most elaborate events are the annual Mass Games (known in Korean as Arirang). They pay tribute to the country’s history, founders, and current leaders through gymnastics and dance performances put on by thousands of participants. On June 13, 2004, the Telegraph reported that, at the end of the 1990s, a plan hatched by a number of Korean army generals was uncovered, and the conspirators arrested, to assassinate Kim Il-Sung. After they were interrogated, the generals were executed in the May Day Stadium. Petrol was poured over them and set alight, burning them alive.

(Credit: IO9.com)In 2012, North Korean archaeologists announced to the world that they “discovered” the resting place of a UNICORN. The Telegraph reported in November 2012, North Korean archaeologists claimed to discover a mythical unicorn lair belonging to King Tongmyong, founder of the ancient Korean kingdom. The announcement was made by the History Institute of the DPRK Academy of Social Sciences, which reported that the lair was found 220 yards from a temple in Pyongyang. “A rectangular rock carved with words ‘Unicorn Lair’ stands in front of the lair. The carved words are believed to date back to the period of Koryo Kingdom (918-1392),” the report said. “The temple served as a relief palace for King Tongmyong, in which there is the lair of his unicorn.”

The tallest flagpole in the world in the North Korean town of Kijong-Dong. (Credit: Korrespondent.net)North Korea built a ghost city on the border with South Korea, to encourage defection. As reported in a 2014 New York Post article, according to the Korean government, the village of Kijongdong, located in the North’s half of the Korean Demilitarized Zone (DMZ), contains a 200-family collective farm, serviced by a childcare centre, kindergarten, primary and secondary schools, and a hospital. However, observation from the South suggests that it’s actually a ghost town, created to encourage South Korean defection. Until 2004, massive loudspeakers mounted on several of the buildings continuously delivered DPRK propaganda broadcasts relating the North’s virtues in great detail and urging disgruntled soldiers and farmers to simply walk across the border to be received as brothers. Eventually, as its value in inducing defections proved minimal, the content was switched to condemnatory anti-Western speeches, Communist agitprop operas, and patriotic marching music for up to 20 hours a day.

Ryugyong Hotel (Credit: Commons.Wikimedia.org)For 20 years, the world’s tallest hotel was a 105-story empty pyramid in Pyongyang. With 105 floors, the Ryugyong Hotel was designed to be the world’s tallest hotel at the end of the 80s, but the construction was halted in 1992 as the country entered a period of economic crisis after the fall of the Soviet Union. Japanese newspapers estimated the cost of the hotel at $750 million, which is 2% of North Korea’s GDP. For over a decade, the unfinished building sat vacant, and without windows, fixtures, or fittings, appearing as a massive concrete shell. In the late 1990s, the European Union Chamber of Commerce in Korea inspected the building and concluded that the structure was “irreparable.”

Pyongyang Department Store No. 1 (Credit: Asktran.com The largest department store in all of North Korea, the awkwardly-named Pyongyang Department Store No. 1, offers a wide variety of items including foodstuffs, electronics, clothing, and furniture. As of 2013, approximately 70% of the items in the store were produced domestically. The store is one of several official tourist stops in the city. Just one small problem though – in a documentary which aired on PBS’ Frontline, Secret State of North Korea, it was reported that the film crew had attended the store, and learned very quickly that NOTHING in it was actually for sale. It was an elaborate smokescreen to billboard the country’s economic strength – but it actually has generally done the exact opposite. 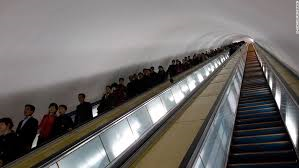 The massive escalator taking Moscow residents 100 metres deep into the Metro. (Credit: TotalRehash.com)The Metro is seriously deep. In fact, Pyongyang’s metro network is reportedly the world’s deepest. Started in 1966 as a way to connect top secret military buildings, and built by North Korea concentration camp prisoners, the Pyongyang Metro is 100 meters underground and it takes a couple of minutes to ride the escalator down to the station. The journey is long enough that some commuters sit on the steps — despite the signs asking passengers not to. The underground network has two official lines and 17 stations. However, there are rumours of several other secret stations used by government and military only. Inspired by the grand Moscow Metro, many of the stations have ornate chandeliers and paintings and murals on the walls.