The Glorious Church #2 – Influencing The Ages

I believe the Christian Church is without a doubt the most inspirational organization ever conceived.  And here’s why…..

Check Out The Entire Series!

The Bible, the cornerstone of the faith, is the best selling book in human history, according to the Guinness Book of World Records, and though it is impossible to obtain exact figures, a survey by the Bible Society concluded that around 2.5 billion copies were printed between 1815 and 1975, but more recent estimates put the number at more than 5 billion.  By the end of 1995, combined global sales of Today’s English Version (Good News) New Testament and Bible (copyright for which is held by the Bible Societies) exceeded 17.75 million copies, and the whole Bible had been translated into 349 languages; 2,123 languages have at least one book of the Bible in that language.

Christianity is called the “singing faith” for a reason – it has inspired men and women to write more songs of praise, worship, adoration, teaching and more than any other single subject or organization in history.  The music at times is so profound, it can cause one to weep, to think, to pray, to dream, to hope, to believe, to repent.  Handel’s triumphant symphonic Messiah was so powerful in both message and music, that when the final dramatic Hallelujah Chorus was played for the first time in London, in 1743, King George II was moved in a spontaneous act of worship to stand to his feet throughout the entire Chorus, and thus so did the entire audience.  Those who attend a performance of the Hallelujah Chorus even to this day have been standing ever since.

4 years before America became a nation, a man named John Newton, captain of a slave trading ship, was caught one night in a terrible storm, and witnessed a fellow crew member standing beside him get swept out to sea.  He cried out for God to have mercy on him, and within hours the storm calmed. He made a serious decision to accept Christ and reform his life – the first change being his decision to never captain a ship again, and to reject the slave trade completely. As part of his testimony years later, which he often wrote out for many to read, he penned these words: “Amazing Grace, how sweet the sound, that saved a wretch like me.  I once was lost, but now I’m found, was blind but now I see”.  “How sweet the sound” indeed – it’s now the most well known and beloved Christian song of all time, appearing in over 1,000 different hymnals, and has been recorded thousands of times in the last 100 years.

In most listings of the top 10 paintings of all time, the most famous is arguably the Monalisa, but the next three depicted Biblical events – with Leonardo Da Vinci’s The Last Supper at #2, The Creation of Adam by Michelangelo #3 and Caravaggio’s Beheading of John The Baptist at #4.  What would inspire a man so much to paint for the glory of God, that Michelangelo’s works of art on the ceiling of the Sistine Chapel in Rome took him four years to paint – most of that time spent laying on his back and staring upward toward the ceiling as he worked, and most likely constantly dripping paint in his face.  His sacrifice was so worth it, however – today, over 5 million visitors a year come to see his beautiful display of Biblical artwork – over 20,000 a day in the summer, and all are left captivated by what they see.  What other subjects could inspire such tremendous dedication to ones artwork?

Michaelangelo’s David also stands as one of the top five most famous sculptures of all time.  The artist, who would go on to be deemed by many as the greatest artist who ever lived, painting the entire ceiling of the Sistene Chapel, was a deeply devoted follower of Jesus Christ who, as a young boy of 26, took on the incredibly demanding request to fashion this Biblical work of art – with no prior experience.  The block of marble was moved to his little workshop, so he could work in secret for the next two years.  What would inspire a young man like this to stand in the pouring rain, soaked to the skin, as he chipped away in the courtyard of his little shop – the block of marble being far too large to move anywhere else.  What could keep him motivated to work for over 700 days in a row with no input, no encouragement, no suggestions from established sculptors?

His style was so revolutionary, and those judging the work at the end were so stunned by his brilliance, they determined that they were no longer going to place the statue on the roof of the cathedral in Florence, as it had been commisioned.  They deemed the work to be “too perfect”, made of the whitest marble in the world – and being that it was also 17 feet tall and weighed 6 tons, it was impossible to hoist to that height anyway.  As it was, it took four days for 40 men to roll it out of his workshop, where he had worked alone for so long, and move it the 1/2 mile from his home to the city square, where it has stood in a position of honour for over 500 years, adored by countless millions. From the fame generated from this masterpiece, he went on to become a great sculptor, painter, architect and poet, and died at the very old age of 88, nicknamed Il Divino (“the divine one”), because his works instilled such an awesome view of God and Jesus in all their glory.

It is easy. You just chip away the stone that doesn’t look like David. 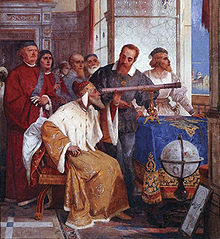 In 1610, Italian astronomer Galileo Galilei looked up at the heavens using a telescope of his making. And what he saw would forever revolutionize the field of astronomy, our understanding of the Universe, and our place in it. Centuries later, Galileo is still held in such high esteem; but what some may not know is he was inspired by his love for God to study and better understand astronomy, mathematics, and physics – introducing the whole world to four of the moons circling Jupiter, the study of Saturn, the phases of Venus, and to study sunspots on the Sun. Galileo’s observations strengthened his belief in the theories of Copernicus, another believer in Christ, that the Earth and all other planets revolve around the Sun.  Copernicus would also go on to shake the whole world with the notion that the world was a spherical ball, not flat, and rotated at an incredible speed.  Sir Isaac Newton, who also was a strong Christian believer, famously taught us that “To every action there is always opposed an equal reaction.”  This international scientific superstar, who first introduced the theory of gravity, once said:

“We account the Scriptures of God to be the most sublime philosophy. I find more sure marks of authenticity in the Bible than in any profane history whatever.”
-Sir Isaac Newton

In 1776, men who believed in the Word of God as their main source of guidance stood up to the British king of the day, and revolted against his authority, fought and won a war of Revolution, and created the richest, most scientifically advanced, most poetic, most religiously inspired, most literary, most prolifically artistic, most politically influential and militarily powerful nation in the history of the world.  They stood up to the horrors of Nazism, Communism and even fought their own internal demons over slavery – and defeated them all.  Their influence on many of the other nations of the world is absolutely unquestionable.

An innumerable host of poems, short stories, novels, plays, hymns, symphonies, praise and worship choruses, contemporary Christian songs, paintings, sculptures, statues and more have come from the influence of the Christian church on art, literature, and music.  The Church has changed the world, and we do so because of one abiding belief, best stated in a powerful hymn: