The Cross and the Poppy

In Canada today, the two most dramatic symbols representing our society, our freedoms – even our very identity as Canadians – are arguably…

…The poppy, which we wear with pride around Remembrance Day (November 11) annually, and the Cross, which we revere every day of the year.

So it should be no surprise that BOTH symbols are under fervent attack by secular humanism and the rise of false religions, more than any other in Canada today.  For if the enemies of everything we hold dear simply strike at our foundations, this entire structure we call “Canada”…

…will come crashing to the ground.

We are NOTHING as a country, if we choose to ignore the individual and corporate sacrifices, (in “sweat, blood, toil and tears”, as Winston Churchill once said), of the brave men and women who have served in our Canadian Armed Forces with honour for 152 years and counting.

On Remembrance Day annually (November 11), we pause for a moment at 11:11 AM local time, in whatever part of this HUGE country’s we may be in, to commemorate the moment when, on that date and time in 1918, the Great War – the “War to End All Wars”, the “Seminal Catastrophe”, or the “European War” as it was known, finally came to a close.

This was the first global war in world history.  Starting in Europe on July 28, 1914, and carrying on for 1,567 days until November 11, 1918.  70 million troops marched onto battlefields in Europe, Asia, Africa and the Middle East, including 60 million Europeans, making it one of the largest wars in history.  It was also the deadliest, claiming 9 million soldiers and 7 million civilians, as a direct result of the war, and over 20 million others from diseases like the Spanish flu, that claimed another 50 to 100 million, starvation and scattered genocides that followed.

Canadian National Vimy Memorial in France – where the names of the 11,285 Canadians who lost their lives in France and who had no known grave are recorded.

We wear a poppy to commemorate what our soldiers did there because it MATTERED.  Our young boys stepped into living Hell on hardened battlefields, that had equally hard names to pronounce and spell –  like Ypres, Festubert and Givenchy (1915), The Somme (1916), Vimy Ridge, Hill 70, Lens, Passchendaele and Cambrai (1917).  In every situation, we did things beyond our training.  We successfully completed missions that France and England, who had 1,000 year old military histories, couldn’t do.  Canadian soldiers often did the unthinkable – at times, even the impossible – for 1,567 days (from July 28, 1914 to November 11, 1918), and we assisted the Allies in defeating the Central Powers, which included three Empires (German, Ottoman and Austro-Hungarian), as well as Bulgaria.

Little Canada was not even 50 years old when the war started.  Only 8 million residents in the whole country then.    We grew up into adulthood before the eyes of the world.  So foundational was our input in World War I that the last 100 days, from August 8 to November 11, 1918, are known today as “Canada’s Hundred Days”.  At one point during World War I, 7% of Canadians were in uniform, one of the highest participation rates by any army in any war in world history.   If the US had that size of army based on population, it would number 22 million.  If China did, their armies would have number 97 million. 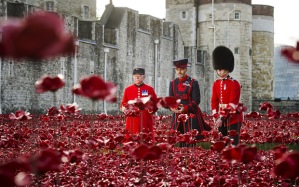 The installation ‘Blood Swept Lands and Seas of Red’ at the Tower of London, commemorating the centenary of Britain’s involvement in the First World War . (Credit: Geoff Pugh/The Telegraph)

We wear a poppy to show solidarity with the everyday Canadians who fought for us so long ago.  They were us.  A total of 619,636 Canadians enlisted with the Canadian Expeditionary Force during the war, 424,000 served overseas – and 59,544 died during the war (51,748 as a result of enemy action, and 7,796 from “friendly fire” incidents, accidents and disease).   Hundreds of thousands more worked in the war effort back home, in administration, factories making munitions, equipment, tanks, planes, ships, uniforms, and growing and packaging food and medicine.  There wasn’t a familiy in Canada that was untouched by the war – there were likely few in the country that didn’t know someone overseas.  Many also knew someone who died there.

And this war was not as advertised – it did not “end all wars”.  In fact, just 21 years later, the world would once again be set on fire, with battles raging on three continents, as Hitler and his Nazi hordes attempted to conquer the world.  By the time the final bomb had been dropped on Nagasaki on August 8, 1945, and the two wars had finally ended in Europe, Africa and Asia, over 60 million people had died, including 25 million Russian civilians alone.

We wear a poppy to remember that Canadian soldiers changed the world.  And Canada had become a new symbol of freedom and hope in the world.   We sent over 1 million soldiers to Europe, many of whom didn’t come home for 6 years in World War II.  Tens of thousands didn’t come home at all.  We declared war on Hitler just one week after Great Britain and France did, on September 10, 1939.  We weren’t forced to – the King had told our government that we had free will to determine if this is was a cause we wanted to send our boys into harm’s way for.  We debated it in Parliament, we thought about it, we prayed about it.  And we did it.  Once we declared war on September 10, we had troops on the ground in Europe just 2 weeks later.  And our boys volunteered for it.  It took the US another 820 days before they joined the war, and their troops had to be drafted, even then, to do so.

We wear a poppy over our hearts, because we loved these young men, and because they gave all they had, with all their hearts, for us.  We honour the heroic contributions of our soldiers, over the last 1.5 centuries, to the building of our nation.  And to the freedom enjoyed by the entire Western world.  They were literally a force for good that stopped the forces of evil spreading across the globe.

Speaking of which – there are some misguided Cretans who introduced a rainbow poppy this year, just before British Armistice Day – like the gay community wasn’t getting enough attention during commemorations for our war dead?  Attempting to turn the poppy into a culturally misappropriated gay symbol is outrageous.

These are likely the same morons that wear a pink triangle as a symbol of connection with the LGBT community – not realizing that the symbol was introduced in the Nazi concentration camp system, along with the yellow star, to help sort out which prisoners were which. 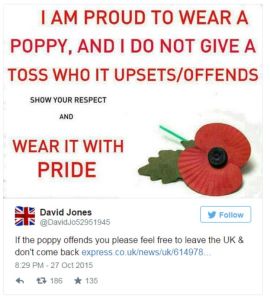 It is also truly disgusting that some in the Muslim community boycott the sale of poppies because they consider it a symbol of “racism”, and some Legion branches in the UK stopped selling them in “certain areas” of Britain to avoid offense, though they have been selling them throughout the UK since 1921.  This vocal minority of Muslims try to extinguish the symbol altogether – yet they are hardly the spokespeople for racial tolerance in the world.

In Canada, our freedoms are only authentically maintained when our people still hold dear to the sacrifices symbolized by the POPPY – and we must “NEVER FORGET” to STAND AND SALUTE those who shed their blood for victories over dictators and despots.

However, that freedom only truly exists in Canada and indeed in EVERY nation on Earth, when the people hold EVEN MORE dear to the Sacrifice actualized by the CROSS of JESUS CHRIST – and we must “BE IN REMEMBRANCE” to KNEEL, BOW AND CLING to the One who shed His blood for our final victory over the Devil and even Death itself. 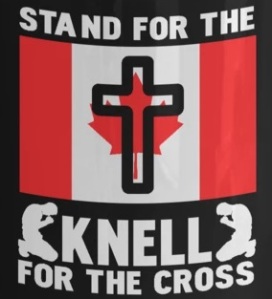 I STAND to honor the anthem and the flag, and symbolically pin a poppy OVER MY HEART today, with pride and thankfulness.

I KNEEL and BOW to honor the Cross, and literally invite the Saviour of the World, Jesus Christ, to LIVE INSIDE MY HEART, with humility and thankfulness.

Because of the sacrifices of Canadians – on far off battlefields – many individual freedoms are enjoyed today by the Canadian people.

But without the Sacrifice of Christ – “on a hill far away” – WE HAVE NO FREEDOM AT ALL – either on this Earth or eternity to come.

“It is for freedom that Christ has set us free. Stand firm, then, and do not let yourselves be burdened again by a yoke of slavery.” (Galatians 5:1)

“In him and through faith in him we may approach God with freedom and confidence.”  (Ephesians 3:12)

By Shawn Jorgensen,  Founding Editor
Calling Out Community
Posted:  November 10, 2019
[God’s Got A Plan For You!]