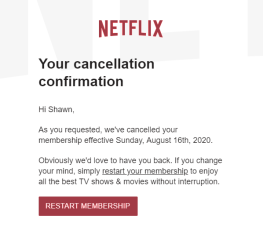 Today I did something I never thought I’d do, after years with the service.

I cancelled my #Netflix subscription.

And you should too.  Here’s why.

On July 23, 2020, #Netflix made a conscious effort to tweet 9 TIMES in one day about an episode of the Babysitter’s Club, which featured a transsexual child character.  Here are those tweets: 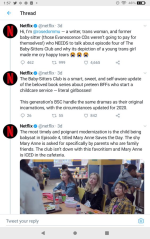 It was a more than a Conservative Christian blogger of sound mind and body to handle.

And this wasn’t the show’s first controversial episode.  Here, they show a WITCH, who explains how harmless witchcraft actually is.  She states the following during an episode – which Netflix felt was important enough to highlight in a meme and tweet out, with the message: “when someone calls you a witch, say thank you”:

“Now, historically, the term “witch” has been used to describe people, primarily women, who refuse to conform to society’s expectations of who they should be.”

Unbelievable.  Note that there isn’t a single show that has been highlighted by Netflix as an example of how to become a CHRISTIAN.  God forbid, actually – they are unlikely to communicate the truth of the Gospel effectively anyway, even though a child can understand it.

But if you want to become a WITCH, welcome aboard.

But, I actually don’t care WHAT the topic would have been. When I pay a membership fee every month for programming, I don’t want to see the company openly pushing ANY agendas out there – whether I agree with them or not. Media companies have NO BUSINESS promoting CONSERVATIVE OR LIBERAL causes.

That’s NOT their role.

Netflix needs to STAY IN THEIR OWN LANE.

When they do, however, promote ideologies I do not agree with, I am guilty by association when I continue to promote that service with my hard-earned dollars.  In essence, I’m financially contributing every month for them to push a radical agenda I don’t agree with.

Why am I against them promoting this transsexual character so forcefully?  Because they aren’t also stating that 40% of transsexual adults have either attempted or considered suicide, according to the Center for Suicide Prevention.

They are NOT experts in those specific fields, nor do they employ experts to guide them in the discussion. They will undoubtedly SAY AND DO THE WRONG THINGS that don’t “promote dialogue” – they MISREPRESENT the issue or topic with incorrect facts or sappy pretext, AND NO ONE WINS FROM promotion of propaganda.

But they aren’t just inaccurate.  They are BLATANT in their agenda.  Here’s an example – “Big Mouth” is a newer cartoon on Netflix, and in this scene, we see two small boys wrestling on a bed shirtless, while a group of men stand around and watch.  This is a blatant and outrageous example of pedophilia.

Need more proof?  Here are examples of 3 different recommendations that Netflix made to viewers, based on shows or movies they had watched:

When huge media companies like this step into a debate and PICK SIDES, you may look at it and say “good for them” – when it serves YOUR purposes. But that’s what Hitler forced German media to do from 1933-1945. Can you trust the media giants to ALWAYS promote YOUR values?

OF COURSE NOT – they shouldn’t be allowed to promote ANY values. Because TODAY they will be on your side and TOMORROW your biggest enemy – all dependent on what reprobate is running it, or what amoral anti-American or anti-Canadian or globalist or capitalist or socialist stock holders they are trying to impress.

Your specific belief system does NOT NEED ASSISTANCE from big media companies. They are PANDERING to you because they WANT YOUR MONEY, or because they are, like German propaganda, taking direction from someone behind the scenes who doesn’t actually care ONE BIT about your best interests either. 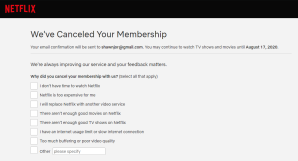 I just cancelled my Netflix account FOR GOOD. I’m not paying to support some propaganda machine. I’m sick of being pandered to, using my membership dollars to actively promote causes I DO like, while also pushing ones that I despise. When big media tries to play both ends against the middle, they should be tossed on the scrap heap, as progressive societies have done with every failed propaganda organizations of the past.

If you are a Conservative Christian: you have no business supporting a company that openly promotes shows with witchcraft, Satanism, atheism and comedy mocking God, the Bible and Jesus.

If you are gay, you have no business supporting a company that actively promotes over-the-top stereotypes of ridiculous drag queens and overly stupid or sexualized gay characters that actually MOCKS AND RIDICULES you.

If you are a man, you have no business supporting a company that portrays your gender as perverted, stupid, backwards, shirking responsibility, leaving families behind to “find themselves”, have no social skills, are easily controllable, or are emasculated, testosterone-free Beta males that share clothes with your gal pals.

If you are a woman, you have no business supporting company that portrays your gender as nothing but single, shrill, conniving, deceitful, undesirable radical feminist, man-hating, lesbian-only shrews that despise motherhood, hate children and promote marriage as a form of slavery, or as blown-up blonde bimbos too stupid to come in out of the rain.

NETFLIX IS DANGEROUS, they are untrustworthy – and they will no longer be enriched by my hard earned money.

By Shawn Jorgensen,  Founding Editor
Calling Out Community
Posted:  July 26, 2020
[God’s Got A Plan For You!]