The Two Georges of the Revolution

One of the most interesting stories of the American Revolutionary War revolves around  the two Georges – America’s first President, George Washington, and the British King, George III – and what one really thought of the other.

Prepare to be surprised – and impressed.

Shortly after the Revolutionary War ended, you may be surprised to learn that an artist from the newly-formed United States of America, Benjamin West, was commissioned to paint an official portrait of the monarch of Great Britain at that time, King George III.

The War that eventually led to the formation of the United States of America has been so catapulted to the level of myth, that the horrific reality of the conflict has been nearly lost today by most Americans and British alike.  In fact, 4 great European empires became involved in this World War, as the prospect of conquering the New World for the victor(s) was far too tempting a prize to pass up.

Approximately 400,000 American soldiers and militiamen were recruited out of the 2.5 million people who lived in the Thirteen Colonies – though many of the residents remained loyal to Great Britain during the conflict.  In fact, it’s estimated that nearly 25% of all the men living in the Colonies fought for the Continental Army, led by General George Washington.

Until early in 1778, it was primarily considered a British civil war, but grew into an international battle as 12,000 troops from the Kingdom of France (in 1778) and thousands of soldiers of the Spanish Empire (in 1779) joined the Colonies against 73,000 soldiers of the Kingdom of Great Britain, 29,875 rented auxiliary troops from German states such as the Landgraviate of Hessen-Kassel, and 13,000 American Indians.

Beginning the night of April 18, 1775, when hundreds of British troops fought  at Lexington against Colonial militiamen, until the Treaty of Paris officially ended the war on September 19, 1783, the conflict raged across the 13 Colonies, Cuba, the Caribbean Sea and several skirmishes in Gibraltar and other European territories as well, for a total of 3,059 days – or 8 years and 4 months.  Altogether, nearly 600,000 soldiers fought on both sides of the War – and nearly 250,000 American soldiers and civilians – 10% of the nation – were killed, including more than 130,000 from a smallpox epidemic that followed.  Over 34,000 British, German and Indian solders were killed or wounded on the opposing side as well. 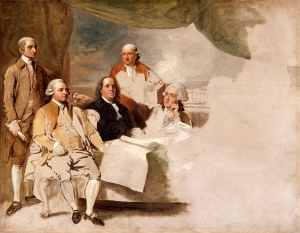 The bitterness of this war was captured by another of Benjamin West’s paintings, Treaty of Paris – initially intended to depict both the British and American delegations at the signing of the 1783 Treaty of Paris, ending the Revolutionary War.  However, the British delegation refused to pose for it, and the painting was never completed, a stark reminder to this day of the bitter division caused by the Revolution.

Therefore, for even for a famed American artist like Benjamin West to be chosen to paint the official portrait of the British monarch at the conclusion of that War was a significant event indeed.

As the story goes, as he sat for the artist, King George III asked West what George Washington was going to do, having won his Nation’s independence, becoming one of the most famous men in the world, as well as a legendary hero to his own people.

The artist visibly shocked the King, when he stated that Washington simply intended to return to his farm.

After composing himself for a moment, the great King George responded with these words, now immortalized for centuries to follow:

“If he does that, he will be the greatest man of the age.”

While the exact words he said may have been slightly different, but George’s sentiment is not questioned by anyone.

That this exchange even occurred is remarkable, as witnessed by court historians at the time.  It says a great deal about who King George really was.  No man in the world had more reason to hate George Washington than he did.  Yet, he praised Washington for doing the right thing, “emulating Cincinnatus rather than Caesar“.

Cinncinnatus was a Roman legendary hero who worked his own small farm until an enemy invasion prompted his fellow citizens to call for his leadership. He came from his plough to assume complete control over the state, and after achieving a swift victory against the enemy, relinquished his power and returned to his farm.  His success and immediate resignation of his near-absolute authority with the end of this crisis (around 458 BC) has often been cited as an example of outstanding leadership, service to the greater good, humility, and modesty.

George Washington, the hero of the American Revolution, actually went home and stayed there until the nation called him to become their first President 6 years later, in 1789.  And when Washington learned that his contemporaries expected him to agree to become the first president of the United States. Washington expressed his dismay in letters to his friends.

To Benjamin Lincoln, who had been one of his generals, he wrote:

“If I am constrained to accept, I call Heaven to witness, that this very act would be the greatest sacrifice of my personal feelings & wishes that ever I have been called upon to make.”

To Henry Knox, who would be his secretary of war, Washington wrote:

“I feel like a culprit who is going to the place of his execution: so unwilling am I, in the evening of a life nearly consumed in public cares, to quite a peaceful abode for an Ocean of difficulties.” 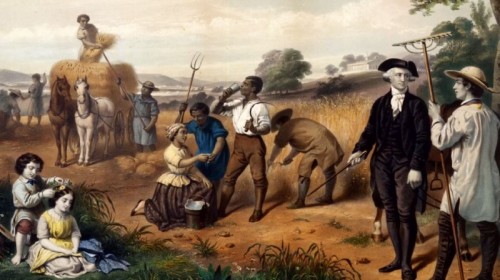 ?George Washington As A Farmer, Standing?,

It should be noted that President Washington’s wheat fields made him the richest man to ever hold office as President of the United States – with a fortune worth over $500 million today – and only exceeded when billionaire Donald Trump took office in 2016.  For Washington to give up that fortune for 8 years, to serve as the first President, was an incredible sacrifice – that all Americans benefit from today.

After  being convinced to serve for 8 years as President, including designing the city of Washington, DC as a triumphant conclusion to his legacy, he then returned one last time to is home in Mount Vernon, where he died as a regular citizen, rather than as a Dictator or a King.

King George III was also not a tyrant and was in fact a very effective sovereign – until mental illness plagued him late in life. When America sought independence, they needed a “bad guy,” so the King got the devil’s horns, even though America’s quarrel was actually with the British Parliament, not its King.

But in actuality, one George admired and respected the other – evidence on both sides of outstanding leadership, that frankly, we could use an awful lot more of “on both sides of the aisle” today, no matter what country’s politics you may be thinking about.

By Shawn Jorgensen, Founder,
Calling Out Community
Posted: April 24, 2021
[God’s Got A Plan For You!]