This afternoon (Friday, May 14), I noticed as I logged into Twitter that a massive audience of over 1.35 million people had tweeted today, using the hashtag #GazzaUnderAttack. 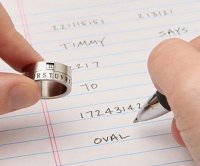 Immediately, I grew excited, as I recognized right away that those who support Hamas were actually sending out a secret message through this hashtag  to their supporters around the world – a rallying cry of sorts to all the enemies of Israel,

I am very proud to offer an alternate hashtag, to help you understand my motive for writing this blog post today – #ILoveIsrael.   And, in order to level the playing field in this current Middle Eastern conflict, I’m exposing the truth of this secret message to the world.

Hang on, this is going to be a wild ride. 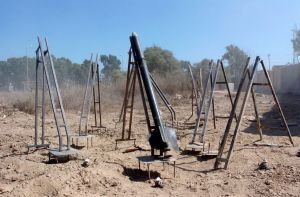 The “Qassam” is a simple, steel artillery rocket developed and deployed by the Izz ad-Din al-Qassam Brigades, the military arm of Hamas. These rockets cannot be fired to target specific military objectives in or near civilian areas, and are “indiscriminate when used against targets in population centers.”

In other words, it’s like shooting buckshot at a barn.  They hope to hit as many civilians as possible.

And the Hamas rockets launched thus far have been quite successful at hitting civilian targets, especially on Monday, May 11 – but they weren’t the Jewish civilian targets that they planned to hit.

The following report was not released by any major Western news outlet that I could find.  Of course not, it impacts on their anti-Semitic narrative – which is highly bizarre, I realize, when you know that most of these news organizations are run by Jewish families today.  However, many American Jews are not all that supportive of Israel – and yes, that is just as schizophrenic as it sounds.

The Algemeiner describes itself as a “global news destination published online and in print, serves as an independent media voice covering the Middle East, Israel and matters of Jewish interest around the world

It was this respected news bureau that reported the following, on Wednesday, May 13: 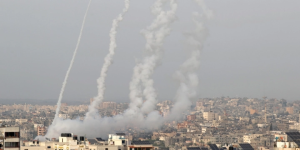 Rockets are launched by Palestinian militants into Israel, in Gaza May 10, 2021. (Credit: Reuters/Mohammed Salem)

“Rockets fired by Hamas at Israel that fell short within the Gaza Strip killed 17 residents in the hours preceding Israel Defense Forces (IDF) operations on Monday, according to an Israeli security official, as the IDF reiterated that errant missiles launched by the terrorist group continued to kill Palestinian civilians during the current hostilities.”

Now, if the reports of Hamas rockets being fired on Israel, and Israeli troops subsequently forced to go into the Palestinian Territories to stop said rockets seems like déjà vu, that’s because it is.

If you’ve followed this blog for any length of time, you’ll recall our reporting back several years ago, on July 1, 2016, and updated on April 27, 2017, entitled: 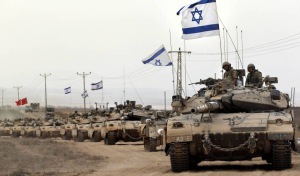 Check out our previous article:
Calling Out Community Blog:
“Israel’s Right To Might?
Posted: July 1, 2015 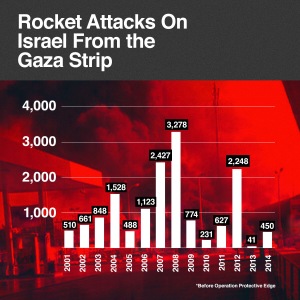 Rocket attacks against Israel, since the withdrawal of Israel from the Gaza Strip in 2005. Photo Credit: Israeli Defense Forces

You may recall seeing this graphic  in that article, charting over 10,000 rockets fired on Israel in the decade up to Israel’s last military incursion into the West Bank and Gaza Strip, in July 2014.

This past week, the skies over Israeli cities have been lit up by more than 1,500 rockets fired by Hamas and other Palestinian militant groups in Gaza — and rippled with the traces of small explosions as Israel’s Iron Dome air defense system missiles have blown many of the crude weapons out of the sky.

Reading this clip from NBC News, you can see what kind of bias I am talking about, with a title like: “Israel bombing Gaza to stop Hamas rockets shows why its U.S. military aid should end “: 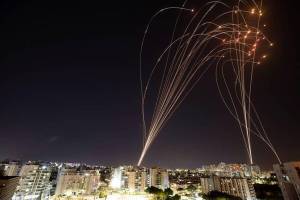 There is a naval version C-Dome and this is used for protecting the sea based strategic assets and ships. (Credit: Reuters)

“On the other side of the wall encircling the Palestinian coastal strip, the picture is very different. While eight Israelis (all but one civilians) have been killed by the rockets that have evaded the Iron Dome, Israeli Defense Forces’ retaliatory airstrikes and artillery strikes had reportedly killed 119 Palestinians in Gaza, including 10 Hamas leaders and 31 children, and injured more than 800 as of Friday. So far, Israel’s U.S.-built F-16 jets and artillery systems have struck at least 150 targets across the impoverished enclave, home to 2 million Palestinians, and leveled three high-rise buildings with links to Hamas. (nbcnews.com).”

One needs to take their reporting with more than a grain of salt.  The article actually seems to attack Israel for defending itself, and seemingly justifies the 1,500 rockets that Hamas has fired into Israel.  No big deal, the Western media rag basically is saying (which, by the way, they all said also in 2015) – “the Hamas rockets aren’t even accurate, and they hardly kill anyone.  But Israel targets and destroys so much, it’s not fair.”

No one is putting a gun to Hamas’ head, forcing them to fire their rockets at Israel,  and they know bloody well what they are doing.  In fact, my article gives examples of Palestinians receiving dropped leaflets from the Israeli Defense Forces, that they would be coming at a certain time and destroying some headquarters of Hamas, etc. – “please leave the premises immediately, to avoid injury”, are the type of sentiments Israel would leave behind. 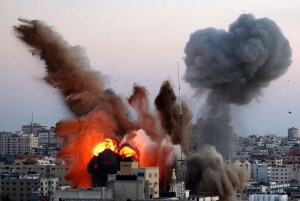 But as their missiles or planes flew over targets to destroy them, they would note that the roof was full of Palestinian women and children, for example.  They were used as a human shields of the Hamas terrorist activities.  They would end up being killed intentionally but for no good reason, other than a sacrifice on behalf of the to stir up hatred toward Israel.

Again, how dare Israel defend itself?

And how bizarre, that there was no related hashtag for #IsraelUnderAttack, with over 1,500 rockets fired at Her?  The blatant insanity of this is astounding.  The blatant anti-Semitism is sickening.

But of course, we should trust proven anti-Semitic news media to set us straight on what should be considered anti-Semitic and not, right?   LOL 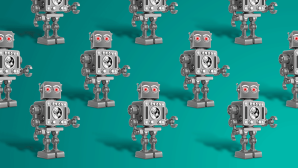 There are some positive exceptions to that rule, however, like this ABC News article: “Rockets launched at Jerusalem by militant group Hamas, leading to unrest”.  Though I don’t know whether I should be categorizing this as particularly enlightening that one news media outlet out of dozens actually knows why any of this started to begin with.  The rest of them DO actually look out their windows at least when they are reporting about world news, right?

I suppose it is just easier to make up stuff in your grandma’s basement, however. 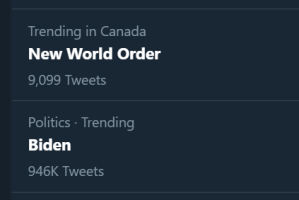 Coming back to our main subject at hand today, the crazy things that tend to Trend on Twitter (say that 5 times fast) – generally, whenever a large group of people intentionally tweet a specific hashtag to get the topic listed in Twitter’s “Trending” section, it can have mixed results.

There is, to be sure, an almost endless barrage of fake media reports and fake spambots pushing those fake stories, all pretending to be real people.  And they can make an awful lot of ridiculous news stories and headlines “trend” as well.  On January 3, 2021, for example, I noticed the particular Trending List above, including both “Biden” and “New World Order”, and found that humorously ironic.  I note that I in no way edited that photo – they were listed in that order. 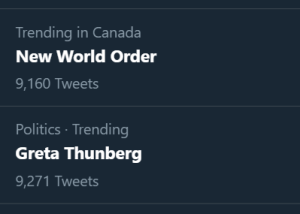 Later that afternoon, however, the list of course changed slightly.  Not sure why everyone was still going on about the New World Order, but at least, the companion Trend was still funny enough to screen shot again – on the same day. LOL

But this week, as I said before, when I saw the Trending Topic was #GazzaUnderAttack, I immediately knew that what they were really communicating was something completely different than that.

And I rushed to get this article out to you.  You need the facts in this situation, not mainstream media’s opinions.

There  is something truly beautiful about poetic justice, when the real message is revealed in the midst of the hype.  And these 1.35 million Twitter users, in using #GazzaUnderAttack, were exposed immediately to me.

From my perspective, one of two messages is actually being communicated here – either::

But it really says that every single one of those people…  ALL 1.35 MILLION– had to be either LEGALLY BLIND, owned a computer with no spell check functions, or were simply ILLITERATE MORONS in general.  By the hundreds of thousands.

My money is on spambots that were made to look like real people.  If actual people had this trending, the Palestinians have truly inspired all of the biggest IDIOTS in the Middle East to join the cause.  Every grade 3 educated, camel loving MORON.  (Not sure what that says about their cause)

How do I know this?

In choosing to use this particular hashtag, declaring their support for the Palestinian people – they were also showing the world that…

NOT ONE OF THEM  KNOWS HOW TO SPELL“GAZA“.

Now, do YOU think the Palestinians faked this entire news story using spambots, to create the illusion of a large group of people “trending this moment on Twitter?  Most likely. Will they admit it?  Not a chance.

If they did, we’d know their lame spambot tactics, and that they had no ACTUAL groundswell of support for their cause.

Either that, or they have to admit that their supporters around the world are so STUPID and out of touch with the cause they support, They can’t even spell the 4-letter name of the region where over 2 million of the Palestinians live?

So which are you going to admit to, Hamas, you mayhem-causing thugs?

Was this trend caused by:

I’m guessing that we’ll be waiting awhile for the answer. 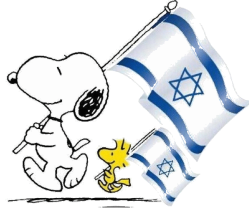 By Israel Is Forever
Founding Calling Out Member
Posted: May 16, 2021
[Gods Got A Plan For You!]