Hilary Clinton responds to a standing ovation from the attendees at the 2015 Women in the World Summit in New York.

Former New York Senator, former U.S. Secretary of State, former First Lady and now 2016 United States Presidential hopeful – Hilary Rodham Clinton’s resume reads better than three of her political opponents combined.  With that much experience and knowledge under her proverbial belt, and recognizing the power of the media to pull headlines out of thin air, she truly gaffed this week in perhaps the worst possible way – by exposing how much of a left-wing wingnut she actually is.

Having been a Democrat all her working life, and having been an outspoken proponent of virtually everything the Calling Out Community opposes, while simultaneously opposing virtually everything that sane, hard-working, God-fearing people with common sense today believe in, it would normally be very difficult for her comments to take us by surprise.

That is, until she took to the podium on April 23, 2015 at the prestigious 2,600 seat David H. Koch Theater at Lincoln Center in New York City to address the 6th annual Women In the World Summit.  Clinton also spoke at the  2013 Summit, which has grown from humble beginnings into an international effort, headlined by this annual three-day event, now in association with The New York Times.

According to their official Facebook page, their objective is “convening women leaders, activists & change-makers to share stories for a better life for women & girls.”  [emphasis ours]  During the week, Summit founder and Media CEO Tina Brown welcomed other women to the stage, including Ashley Judd, Angelina Jolie, and Helen Mirren, as well as numerous female political activists and businesswomen.

In what the AM New York newspaper called a “fiery” and “passionate” speech, Clinton took a particularly feminist tone in her speech, stating:

“Far too many women are denied access to reproductive health care and safe childbirth, and laws don’t count for much if they’re not enforced,” Clinton said. “Rights have to exist in practice—not just on paper. Laws have to be backed up with resources and political will,” she continued. “And deep-seated cultural codes, religious beliefs and structural biases have to be changed.”

A sign at an abortion clinic in Virginia. Credit: The Federalist

Stop the presses. Excuse me? First of all, “reproductive health care” is a code word for ABORTION. And Clinton easily convinced her audience (by their standing ovations) that women are denied access to abortions in the United States of America?  Where exactly?  And how does abortion fit under this Summit’s mission statement to give a better life for girls – one would assume that wouldn’t include the aborted ones.

Secondly, you need to understand clearly what she is saying here.  If religion and societal beliefs that have existed for centuries get in the way of her feminist agenda, God help them: “Deep-seated…religious beliefs have to be changed”?

Louisiana Governor Bobby Jindal shared his outrage at her remarks at the Citizens United Freedom Summit on April 25.  He asked aloud how Clinton could actually change an individual’s religious views saying:

“You have to see her most recent comments on religious liberties. Those of us that are pro-life need to have our religious beliefs changed. I can’t imagine a more preposterous and offensive comment,” Jindal said.

It isn’t the religious Right that needs to change it’s views on abortion. According to the Centers for Disease Control (CDC) in the U.S., in 2011, 730,322 legal induced abortions were reported to them from 49 reporting areas. The abortion rate was 13.9 abortions per 1,000 women aged 15–44 years and the abortion ratio was 219 abortions per 1,000 live births.  Yes, you read that correctly – for every 4.5 babies born in America, one is aborted.

Perhaps Americans were starting to wake up to the horrific Holocaust that is abortion.  According to the Guttmacher Institute (GI) – an “institute seeking to advance sexual and reproductive health through research, policy analysis and public education” (whatever that means), 2011 and 2012 saw the highest number of abortion restrictions ever:

“Reproductive health and rights were once again the subject of extensive debate in state capitols in 2012. Over the course of the year, 42 states and the District of Columbia enacted 122 provisions related to reproductive health and rights. One-third of these new provisions, 43 in 19 states, sought to restrict access to abortion services. Although this is a sharp decrease from the record-breaking 92 abortion restrictions enacted in 2011, it is the second highest number of new abortion restrictions passed in a year.”

The numbers of abortions performed in the United States, as officially reported by both the CDC and GI (discussed above) is so staggering, it’s almost impossible to process – since 1973 through 2014 inclusive, the official total is: 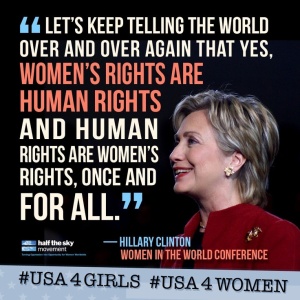 What about the rights of all the aborted baby girls that never get to GROW UP TO BECOME WOMEN, Hilary? Guess babies can’t vote so who cares?

According to the National World War II Museum in the United States, that number equates to roughly the same number of soldiers and civilians killed during all of World War II, in Europe, Asia and Africa combined.  57 million Americans that will not add to the labour force, or pay taxes, or grow up to be doctors and lawyers and pastors and politicians, artists and painters, authors and musicians, volunteers in our communities.  57 million voters that would have changed the direction of America.  Social welfare programs wouldn’t be going bankrupt.  The lost revenue to local, state and national government coffers is incalculable.  The brain drain in inventors, scientists, medical researchers, business leaders and others has led to America’s demise from a position of strength.

But most impotant, these were 57 million PEOPLE – brothers and sisters, fathers- and mothers-to-be.  Was a future President amongst them?  The doctor who was to find the cure for cancer or AIDs?  The precious souls, all gathered in the arms of God.  Even more saddening, according to the World Health Organization, every year in the world there are an estimated 40-50 million abortions. This corresponds to approximately 125,000 abortions per day.

Hilary thinks we should have had MORE of them.  In fact, as President of the United States (God help us all) she would inevitably FORCE even greater abortion rates upon us.

Do you still think Americans should elect Hilary Clinton as President just because it’s “time for a woman in the White House”?