The Pope and Palestine: Abbas Is An “Angel”?

Let me start off by saying I am not a Catholic, either practising or backslidden (and how does one exactly “practise” being a Christian – does THAT “make perfect”? I don’t think so). I did attend a Catholic elementary for Grade 2 only, and that was only a geographic issue for my parents – they wanted me to attend a school close to our temporary home while my Dad built a new one across town.  Also thought the nuns would be good for me.

Chick Publications helped to keep me suspicious of Catholics for decades.

I was summarily raised (very proudly, I must say) a right-wing, evangelical, born-again, Protestant believer in Christ. In fact, as a youth, I was so Protestant that I was taught that Catholics were wrong on the worship of Mary and the saints – and thanks to the power of groups like Chick Tracts, I believed they were even part of an evil empire used by the Devil to deceive the true Church. I attended 5 years of Protestant Bible college, graduating with honours with two Bachelor degrees, and that belief system carried through my 20s and early 30s.

Now, nearly 50 years old, I have become a bit less narrow-minded. And I’m so glad, or I would have missed out on seeing the hand of God truly evident in the lives of two different Catholic popes. Yes, you read that right – I am a fervent, well-educated evangelical Protestant who is so proud of the life and Christian testimony of two of the Catholic Church’s great heroes of the faith – men that I truly believe are as much “born again” Christians (of the heart and not just the head) as I am myself. 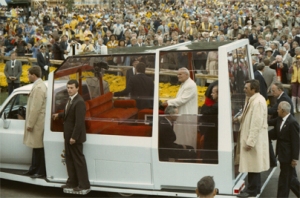 Pope John Paul II was a man so in love with Jesus, his messages set the whole world on fire. And the people responded to him. Canadians will never forget the dramatic moment in 1995, as this 75-year old man drove into the packed Skydome stadium in Toronto in his Popemobile, how he was welcomed by over 70,000 teenagers like a rock star on world tour. The roaring standing ovation of the crowd lasted over 20 minutes and could be heard several miles away.

Under this gentle man’s leadership, Catholics worldwide took up the battle against abortion and painted it the murderous Holocaust of a selfish, godless society that it truly is. This man encouraged Christian believers of every denomination to become one Church of Jesus Christ again. His book Crossing the Threshold of Faith is used today in Protestant seminaries as one the most beautiful arguments for the Christian faith ever written.

It also made him the first Pope to write a #1 worldwide bestseller, selling 1 million copies in Italy alone. In fact, John Paul is the most prolific writers for Christ in history, with more copies of his books in print than any other Christian author since the writers of the New Testament themselves

This man of God and his worldwide following of Catholic believers also brought Jesus back with a triumphant bang into our Christmas and Easter celebrations. I will be forever grateful when I see the giant “Keep Christ in Christmas” signs that the Knights of Columbus put up everywhere. 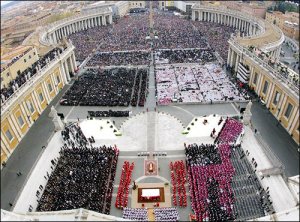 It was absolutely fitting then that the entire world, Catholics, Protestants and otherwise, went into deep mourning at his death. His funeral was the single largest gathering in history of heads of state outside of the United Nations, surpassing even the state funeral of the great British Prime Minister Winston Churchill (1965).  Four kings, five queens, at least 70 presidents and prime ministers, and more than 14 leaders of other religions attended, mourning alongside the largest single gathering of Christians in world history – more than 4 million mourners gathering in Rome alone.

Now, another man of God has come to lead this massive church of nearly 1 billion Christian believers around the world – Pope Francis. At first, he seemed quirky – driving an old car around, moving out of the Papal Palace into a smaller apartment – even driving an old car at times, rather than using his Popemobile.

So it was understandable when media outlets jumped earlier in May 2015 on the news that this Pope, after meeting Palestinian Authority President Mahmoud Abbas, called him an “angel of peace”.  I thought to myself – “oh no, this guy isn’t going down THAT road of being anti-Israel, is he?  God, please don’t let this be true. He had so much positive influence and this would be such a negative on him”.  I personally could not stomach it.

Thank God, it was the media in error and not this man. In fact, when one studies the actual video of the meeting between the two men, it is clear that the Pope less dramatically expressed the hope that the PA leader would become an angel of peace!  He said he “could be” an angel of peace.  That’s not the same thing as saying he WAS one at all.  Any one of us could be.  And, after all, Pope Francis present Abbas, a Muslim supporting radical Islamic terrorism, with a medallion full of Christian symbolism – an angel of peace destroying the evil spirit of war.  Ouch, that’s more a slap in the face than anything, I would think.

For the next two days, despite unequivocal reporting by three of the world’s most prominent news agencies that the pope called Abbas an “angel of peace,” and despite Italian newspaper La Stampa’s equally unequivocal report that Francis merely expressed the hope that Abbas would become such an angel, the Vatican’s own website and news agency said nothing.

The Vatican’s chief spokesperson, Father Federico Lombardi, who was present when the pope hosted Abbas in the Apostolic Palace’s papal apartment, told The Times of Israel that he “did not hear the exact words spoken.” This, Lombardi elaborated, was “because they were said in a very colloquial manner between the pope and the Palestinian president, who were in close proximity to one another.”

I say “fair enough”.  This wasn’t politics at all, and I’m disgusted by the media’s attempts to blacken the Catholic Church with controversy it neither earned nor deserved.  I was also overjoyed when I saw the breaking news headlines, posted by the CBC (Canadian Broadcasting Corporation) on May 19, which states quite bluntly:

Pope Francis meant no offence to Israel by referring to Palestinian President Mahmoud Abbas as being “an angel of peace” and intended to encourage harmony between the two sides, the Vatican said on Tuesday.

Francis met Abbas at the Vatican on Saturday and used the words as he presented the Palestinian president with a large bronze medallion representing the angel of peace, one of his customary gifts to visiting presidents.

Sorry Hamas, if you were looking for a Catholic mouthpiece to either pat you on the back, or praise your leader, think again.  Pope Francis is a socialist, and there are things about his philosophy that I don’t agree with it.and

But he’s also a good and honourable man, and a Christian.  He would never agree that terrorism is the answer, nor would he believe that bad-mouthing Israel was the best policy for the head of the Church’s largest visible body.