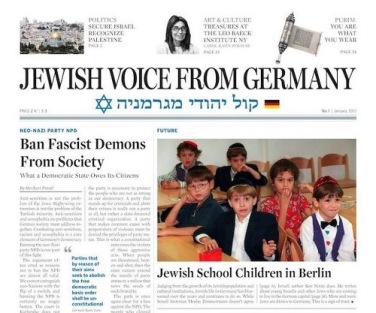 A new Jewish-German publication was important enough of a cause to lure German Foreign Minister Guido Westerwelle to the launch party two weeks ago. He also wrote a glowing tribute in the first issue:

“This publication shows the world the new blossoming of Jewish life in Germany,” wrote Westerwelle, adding, “Jewish life has once again become an integral part of our society. Seven decades after the Shoah [Holocaust], many different branches of Judaism are again ordaining rabbis in Germany, synagogues are being built, and Jewish schools and preschools opened … our Jewish community is an inextricable part not only of our history, but also – and above all – of our future … We need people who are engaged with and knowledgeable about Jewish history in Germany, and who have a vision for the future, and we need media to convey and elucidate this vision.”

Amen. And who could have thought such a thing would be written about the Jewish race in the birthplace of the Nazis, the Third Reich, Adolf Hitler and the Holocaust?

It would likely surprise many reading this to note that some 100,000 Jews are registered within the community, even though the number of Jews in Germany is probably more than double that.  (Editor: However, it actually made me feel quite uncomfortable knowing that such a registration program exists, but they clearly do not see it as a threat of any kind.)

According to publisher Dr. Rafael Seligmann, the new “Jewish Voice in Germany“focuses on the long, complex, and sensitive connection between the country and its Jewish citizens who were “Germans” until the Nuremberg Laws of 1935 turned them into “Jews.”

Today, there is a vibrant revival of Jewish life, diversity of Jewish opinion, and revitalization of an indissoluble link between Germany and Jews around the world. One might even be shocked to learn that Germany now boasts the fastest growing Jewish community in the world! Mjur 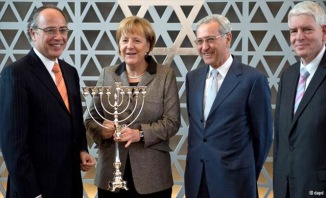 The recognition of the community’s influence goes to the highest office in the land. On November 24, 2012Chancellor Angela Merkel became the first German leader to address the Jewish community’s annual council meeting, seeking to reassure them that a recent ban of circumcision by a regional court was not a cause for alarm, and did not affect their religious ceremony, instituted by the great Abraham himself and practised for millennia since.  She also made clear her continued support for Israel, even as she currently welcomes at least 800,000 Muslim migrants into the country.

We thank God that the German people have once again embraced the Jewish community as the vital, life-affirming group that it is, adding to every aspect of German life.  The interconnectivity between Jewish and the general German populations is a symbiosis that must be protected by both sides, or both sides will perish.

It is that connection, that vibrant excitement and pride, and the concerns of a new generation that readers will find within the pages of Jewish Voice from Germany, which Dr. Seligmann founded nearly one year ago.

Dr. Seligmann believes that if one counts the Israelis living in Berlin and other cities, and the Russian and American Jews living in Germany but not active in the community, one would find nearly a quarter of a million – roughly half the number of Jews that lived in Germany before the war.

Westerwelle and Dr. Seligmann both emphasize the future, rather than the past: “If I only wrote about the Shoah and the Nazis, I would run out of readers,” Dr. Seligmann says. “The subject of the Shoah is, in a way, similar to drugs: it causes such strong emotions. But people are also interested in other parts of Jewish history, literature and culture,” he adds.

The first 30,000 copies of the inaugural issue reached some 150,000 readers in Germany, the U.S., Canada, Britain and Israel. The German press welcomed the publication warmly.

Bild, for example, called Seligmann a “winner” and wished him good luck. That generosity somehow didn’t infect the two Jewish competitors – the weekly Judische Allgemeine and the monthly Judische Zeitung – who chose to ignore the new publication.

“The German press was very excited,” says Seligmann, “but the Jewish press chose not to mention us. That’s all right. The public will decide whether to read us, notwithstanding what they write or don’t write.”

The Jewish Voice logo features its name in English and Hebrew, with a small German flag on one side and a Star of David on the other.

Seligmann sees the new publication as a bridge: “It will connect Jews with Gentiles, Germany with the world. We want to communicate the long history that Jews and Germans share with each other.”

“Here in Germany, we’re witnessing the fastest growing Jewish community in the world,” Seligmann continues. “We have Jewish artists, Jewish writers and Jewish businessmen. Berliners opened their hearts to Daniel Barenboim and Michael Blumenthal, the director of the Jewish Museum. Israeli and Jewish tourists flood the capital.”

In the inaugural issue, you’ll find an upbeat feature telling the story of thousands of Israelis in Berlin. The accompanying photo shows four youngsters draped in German and Israeli flags with the caption reading: “Learning to know each other.”

However, perhaps the love fest between Jew and German is a bit more than we can possibly expect?  For in the midst of this new-found harmony, the Chancellor of Germany has, for reasons that baffle even her own supporters, insisted on throwing open the doors of Germany to 800,000 Muslims – a number 3 times larger than the Jewish population of the entire country.

We believe this story is just beginning to be told.  The real agenda behind Merkel’s insistence on almost destroying her country for the sake of these ravaging hordes is unknown.  Are German Jews safe?

We are paying attention, and we will be there to keep telling the story as it unfolds.

© 2014-2019  Calling Out Community and CallOut Films – a counter-culture collective of Christian conservatives utilizing every social media tool possible to communicate the truths about God, His created universe and mankind that the Devil and liberal Left individuals, corporations, governments and mainstream media outlets don’t want you to hear.

©2014-2020 Calling Out Community / CallOut Films. Ready 'N Steady... ‘Til He Comes™ The Calling Out Community is a counter-culture collective of Christian conservatives utilizing every social media tool possible to communicate the truths about God, His created universe and mankind that the Devil and liberal Left individuals, corporations, governments and mainstream media outlets don’t want you to hear.