IslamRising: Special feature to the Calling Out Community,
Posted January 1, 2016. 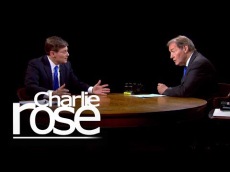 On November 25, 2015, former Obama CIA Director Mike Morell appeared on PBS’ Charlie Rose show, and dropped a bombshell that the Media Party didn’t at first pay much attention to.  During that hour, Morell surprised many by claiming that President Obama has intentionally not ordered the bombing of the oil fields now controlled by Islamic State in Iraq and Syria (ISIS):

ISIS depends on those oil fields for the majority of its operating revenues, and U.S. Air Force jets have specifically avoided bombing them because the White House was concerned about adding to the carbon emissions that promote global warming.  In the DESERT?  Is that seriously not the dumbest thing you’ve heard so far this year?

According to the IBT Pulse Newsletter, ISIS continues to sell about 100,000 barrels of oil at an average of about $20/barrel (discounted), for a take of $2 million every day.  ISIS generals may be radical whacko jihadists – but the privates are reportedly soldiers for hire who are first and foremost trying to earn a paycheque, and are not merely fighting for some twisted ideology.

Many experts believe that if we can cut off this ISIS cash stream, the Islamic State army would quickly disappear – making President Obama’s decision especially bewildering and exasperating.  By putting the priority on a potentially minor impact on the local environment rather than on the global security concerns that such inaction may allow and even encourage, ISIS was able to “miss the bullet” and continue its murderous rampage through the Western world, killing people at random.

This brings back stark memories of the destruction of the Kuwait oil fields back in April 1991.  Saddam Hussein’s Iraqi army set between 605 and 732 oil wells on fire during the first Gulf War, as they retreated from Kuwait.  Almost immediately, the #looneyleftwing was out in full force, predicting an environmental disaster to come: 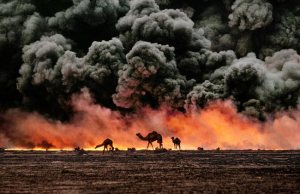 Ummmm nope, neither of those things happened, though some of the fires burned into November that year, releasing 1.5 billion barrels of oil into the environment, the largest oil spill in human history.

Even so, atmospheric scientist Patrick K. Dowling wrote in his paper, “The Meteorological Effects of the Kuwaiti Oil Fires,” that the smoke only affected the weather pattern throughout the Persian Gulf and surrounding region during the periods that the fires were burning in 1991. A 1992 National Institutes of Health study found that emissions of carbon dioxide from those fires accounted for only 2% of global emissions.

The Kuwait oil fields produced about 2 million barrels per day before the Gulf War — at least 20 times as much as the ISIS oil wells generate. The Kuwaiti fires dwarf anything that potentially destroyed ISIS oil wells could produce in terms of harmful environmental effects.  So it would be completely rational and logical to destroy this critically important cash-generator for ISIS.  NOW.

Thank God, my friend, one air force completely agreed with that assessment – and on November 20, 2015, Russian fighter jets attacked a convoy of over 500 oil trucks illegally carrying petroleum and crude oil from ISIS fields to their territories in Iraq (see this article’s Featured Image).  A few days prior (November 16), Russian President Vladimir Putin stated that he had recently told his G20 colleagues that 40 countries including G20 nations are financially helping ISIS by purchasing this illegal oil.

The day before the November 20 convoy attack, Russian General Valery Gerasimov announced that Russia would be allocating 25 strategic bombers for the Syrian mission. Separately, Russian Air Forces will be strengthened with advanced 37 aircraft, including eight Su-34 bomber jets and four Su-27 fighter jets.

So while Canada pulls out of the air strike campaign altogether, and the U.S. worries more about global warming than getting the bad guys, Moscow is more than doubling the strike potential of the Russian Air Force in the region.

Once again, Obama says he wants to fight terrorism, but everything else comes first.  And once again, if you need to get something done properly in the world, you have to call Vladimir Putin.