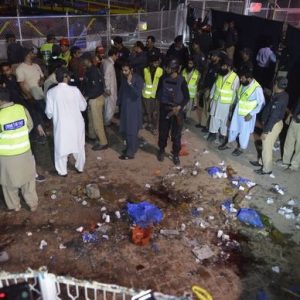 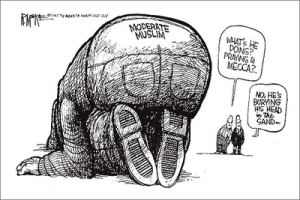 Muslims said “Happy Easter” to the Christians of Pakistan… by blowing up 65 Christians in Lahore, Pakistan – who had gathered at a playground on Easter Sunday to celebrate the resurrection of Jesus Christ.

Let’s cut to the chase – I’ve had enough.  I HATE ISLAM with every fibre of my being.  I didn’t say I hate all Muslims – for I believe there are still some good Muslims worldwide.

But don’t bother to try to argue this point, or tell me Islam is a Religion of Peace. It’s a #ReligionofPieces. Pieces of New York, London, Paris, Brussels. And now Lahore, Pakistan.

Pakistani women mourn the death of relatives after a bomb blast in Lahore on March 27, 2016 (AFP / Arif Aliarif)

And don’t talk to me about “moderate Muslims”.  Let’s look at the facts:

Anyone who tells me that it is in any way justifiable for 65 Pakistani Christians to be BLOWN UP while at an EASTER SUNDAY service – if you in any way defend Islam in this face of this blatantly outrageous and barbaric attack – I’m seriously going to punch you in the face, then declare war on you.

I’m DONE being tolerant of these Islamic jackasses. I will not kiss the ass of any Muslim from this point forward – I’m not sidestepping the facts to stroke someone’s ego.

I don’t care who you are, I am no longer going to tolerate the Islamic hordes attacking my Christian brothers and sisters world-wide, and then hear your liberal leftwing BS about “loving your neighbour” and other related disgracing of Scripture in order to defend Islam.

If you are a Muslim and you don’t agree with me – if you really are outraged by this horrific attack on innocent Christians during  our high holy day of the year – then let me hear you speak out against this horrific travesty, or SCREW OFF AND DIE! Let’s hear you say that radical Islam doesn’t represent you. If not I will consider you the enemy.

I’ve raren’t heard any Muslims speak out against this outrageous attack – not the one in Brussels, nor the one in Paris. Not a bloody one.

One bright light was an imam in Calgary that stated that he had signed an edict with over 30 other Canadians to discourage ISIS recruitment in their mosques.  But they countered it with this statement:

“This is not stopping, this is not reducing; so that’s why we had to take this initiative, to educate people.”

Ugggh never mind.  I guess what they are admitting is that imams have no influence over their people, or more likely,  the imams don’t want to influence them in this way.

Why do they sidestep these issues in moderate Islam?  Because the Quran tells them to DO exactly what radical Islam does – kill the opposition. Don’t tell me it doesn’t because there are 109 verses in the Quran that would call you a liar.

There is a teaching in Islam that Muslims can deceive their enemies to get the upper hand. “Religion of Peace” is that tactic – and it’s a clear smack at the Christian faith, whose central focal point, Jesus Christ, is the “Prince of Peace”.

Do not disgrace Scripture by saying we should turn the other cheek, because in the face of such barbaric attacks of innocent Christians, INCLUDING CHILDREN being slaughtered – I’ll turn your other damn cheek for you.

If Islam wants a war with the Church, some of us will be happy to give you one.