Millionaires… By The Millions!

In April 2009, the Financial Stability Board (FSB) was created by the 26 richest nations on earth to monitor and make recommendations about the global financial system. Founding member institutions included the Bank of Canada, US Federal Reserve, Bank of England, European Central Bank, Central Bank of the Russian Federation, and People’s Bank of China, to name a few.

As the global financial crisis of 2013 abated, this FSB identified a list of global banks that strategically couldn’t fail in the future – known as Global Systemically Important Banks (G-SIBs) – and then they devised a plan to ensure that these G-SIB banks wouldn’t fail.

I note with some concern that no Canadian bank is listed in the 2015 report, while China has 4 banks on this list, out of 30 globally identified.  However, FSB named the 160-year old European megabank Credit Suisse as one of these can’t-fail institutions, and it makes sense.  Not only is a financial powerhouse with over $880 billion in assets, but and Fortune Magazine in 2012 ranked it the #6 most admired bank on earth.

When this bank talks, the world listens – and every year in October, Credit Suisse releases a Global Wealth Report that gives, in essence, a State of the Union for all of the Daddy Warbucks of the world – a broad overall picture of who’s getting richer globally, who’s getting poorer, where and (if possible) even why?

Good News For …Some?

Perhaps this won’t be much of a surprise to some of you, but I was very stunned to learn that there are a whopping 33.7 million millionaires in the world.

According to the October 2015 report, the United States economy seems to be rebounding rather dramatically – with a stunning 46% of the world’s millionaires living within its borders, compared with 41% of the global total last year. The report also highlighted the fact that the U.S. alone added a whopping 903,000 millionaires over the past year, to reach a record-breaking 15.7 million.  Yes, you read that right – in the United States alone, there are over 15 MILLION MILLIONAIRES.

Now, my apologies to Wally the Welfare Whiner – your version of the American Dream IS Over.  The days of welfare entitlement with little to no effort on your part is long over.  But the true American Dream is not dead – as Occupy Wall Street would like you to believe.  It’s every bit as alive and very much as well as ever.  And the 1% are also not 1% in America – more like approx. 4.4% based on current population!

You can’t possibly believe that of the 13.7 million millionaires in the U.S., that all were white men 40+ with university degrees and perfect upbringing?  That takes more faith than it does to believe the truth – there are 903,000 new millionaires this year alone, and some of them look just like YOU.

Now to slash another myth – the middle class is not dead.  Globally, 14 percent of the adult world population belonged to the middle class in 2015 – that’s 664 million adults in total.   It might be especially shocking for you to know what this report uses to define “wealthy”, “rich” and “richest”(where do you stack up?):

The news isn’t as great if you are a citizen of China, where they did add the second-highest number of new millionaires in 2015 (152,000), but they still only account for 3.8% of the world’s total rich, at 1.3 million – even though they are roughly 19% of the world’s population, at 1.3 billion.  That’s right – there is 1 Chinese millionaire for every 1,000 people living in China.  There is 1 American millionaire for every 38 people living in America.

The next time someone tells you that America is sunk, and China is the real financial powerhouse – just remind the socialist wannabe that this is in fact TOTAL CRAP.  For every Chinese millionaire in the world, there are 17 American ones.  China’s mythical “1%” is actually “0.1%” of the population – America’s, as was said before, is “4.4%” of the population.

Now for the bad news, mostly for China.  According to many news sources, including Yahoo! News, a number of countries are opening the doors to the estimated 1 million Chinese millionaires … provided they bring their money with them. It’s something of a bidding war in reverse.  For $1 million, the U.S. will give the Chinese national a green card and residency.

As was reported in February 2014 in the Wall Street Journal and others, Canada’s economic immigration program was in fact so swamped by Chinese nationals that they shut the whole thing down – at least for now.  Our program was too beneficial for the investor, apparently! The canceled visa program granted permanent residency to those who committed 800,000 Canadian dollars (US$726,700) to a five-year zero-interest loan to one of the country’s provinces.  We had to pay it back?  Glad they fixed that problem.

For the first time in modern history, and for a variety of reasons, the report states that: 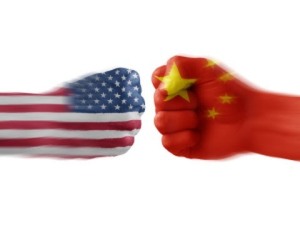 But that’s a bit misleading when the same report states that the U.S. created 750,000 more millionaires than China – presumably, some of them at least were middle class!  I don’t think it’s always a bad thing to get a raise.