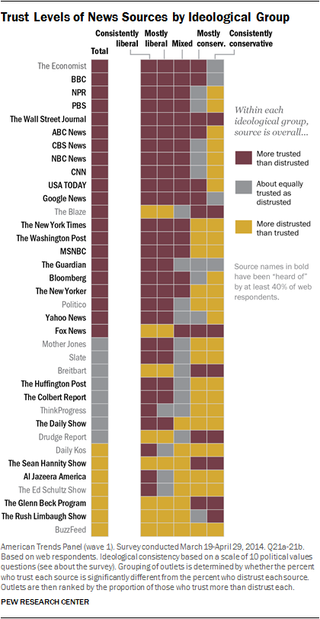 BUT WAIT… this is not GOOD news, CNN anchors “libsplained” today to their pathetically-dwindling but faithful weekday mid-afternoon viewers.  If you don’t already know it, you’ll soon see why this systemic bias, demonstrated against the current President by “the Most Trusted Name In News” …is exactly why they no longer live up to the tagline.

Here’s some truth in advertising: CNN is actually “The Most Busted, Rusted and Crusted Name in News”. (I want them to properly credit me before they start using the new tagline in their regular advertising )

You may laugh or get mad – but in fact, a March 2017 Business Insider report, using data from a 2014 Pew Research Center study entitled “Political Polarization and Media Habits“, did, in fact, prove that CNN is no longer the “most trusted name in news”.  In fact, the American people surveyed felt that their most trusted news sources at that time were all British, with the BBC and the Economist leading the pack.  I would personally concur.

I noticed it right away when Jake Tapper, one of the longer-serving hosts currently on the financially-limping CNN, stated the following on air, regarding the current Trump Gallup approval ratings:

“Brand new CNN poll numbers revealing Americans’ perceptions of the Donald Trump presidency – and they look pretty locked in, while also becoming increasingly nuanced below the surface.  41% approve of the job the president is doing, 53% disapprove.  That’s about the same as it was at the end of March.  Every other elected president of the modern era with the exception of Jimmy Carter had higher approval ratings at this stage of his presidency.”  (Jake Tapper, CNN)

What a pile of RUBBISH. Rasmussen Reports, and other much more reputable pollsters (more on that later) disagree.  @jaketapper is a disingenuous buffoon. The fact that you are so desperate to spin polling numbers as to suggest that every President should have the same approval rating at the same period of their administrations is just about the most irrelevant “amazing statistic” nonsense I’ve ever seen.   I don’t think he’s stupid, but Tapper does say some very dumb things that a person could shoot holes through with very little effort. 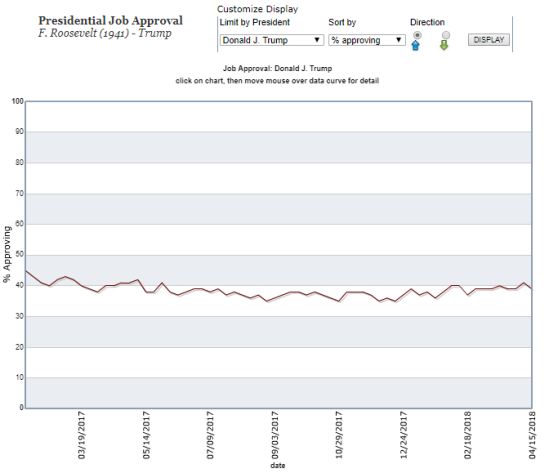 CNN, by the numbers:

CNN’s polling company is a woeful embarrassment.  In fact, in the results of the most recent survey on Presidential approval, I noticed that on one question – the May 2-5, 2018 approval results, they asked how well things are going in the country.

In the first 3 columns, on the first row, I note that 45% said “Fairly Well and 13% “Very Well”…but somehow this added up to 57% “Net Very/Fairly Well” in this pollster’s world?

With the publicity campaign of destruction, @CNN, you aren’t winning – that’s clear.  The American economy, based on the job that President Trump has been doing, is winning the day with Americans.

You know damn well that polls can be manipulated, asking whatever questions you want in the way you want, to get the results you want.  Your pollster, however, can’t even seem to properly ADD so all hope is lost there.  The fact you use the same pollster for everything states that they must clearly share your agenda, especially when you both end up so clearly off the mark so often in polling numbers in these Presidential approval surveys, in polling results before and on election day, and now before the mid-term elections.

In fact, RealClearPolitics, which tracks about 20 different polls for Presidential approval, shows CNN has a CONSISTENTLY lower approval rating numbers for President Trump than many of its fellow news sources.  That’s kinda sad, because it’s so obvious.  To continuously put out these kind of random, ridiculously off-based numbers all the time either indicates some kind of shared mental illness, a shared agenda, or a news source that doesn’t get just how badly they are being duped by their pollster.

But CNN “gets it”, alright – in fact, it reminds me (cynically) that “you get what you pay for”.

Rasmussen Reports still chooses to do an update every weekday to the President’s approval rating numbers, unlike the Gallup organization, which suspiciously stopped doing so in January 2018 – right around the time the President’s numbers started to improve, I note.  I also note that Gallup stopped surveying 3,500 people per update, and reduced that to 1,500, while at the same time reducing the update time to weekly.  Rasmussen Reports has been rated by the popular Media Fact Check site as having a “High” factual reporting history.  They state on their site that “now that Gallup has quit the field, Rasmussen Reports is the only nationally recognized public opinion firm that still tracks President Trump’s job approval ratings on a daily basis.

Why does all this matter?  THEIR approval numbers for President Trump for the last week was not 41% as with CNN: It was 49%.

Again, I hear you asking – “why does this matter”?  Because, dear reader, in the 2016 election campaign between Trump and Clinton – Rasmussen Reports was the only one that got it right.  Had you followed Rasmussen’s findings, as I and many others on the conservative side did before the election, Election Night 2016 was not a surprise to us.  We didn’t have fainting spells over the outcome.  We knew it weeks before it happened.

“The media created a false narrative about the 2016 presidential campaign, and most polling reinforced it. Controversy was the name of the media game, most of it focused on Republican Donald Trump, and many media outlets, most prominently the New York Times, and many pollsters were saying a little over a month ago that Democrat Hillary Clinton had already won. But the three daily tracking polls – the Los Angeles Times, IBD/TIPP, and Rasmussen Reports – consistently showed a much tighter race.”

In 2012 (see above), a Fordham University study by Dr. Costas Panagopoulos, who once served in the office of then Senator Hillary Rodham Clinton, compared pre-election polling with the results from Election Day. The study ranked 14 organizations – but suspiciously chose to omit the results of Rasmussen Reports. However, after the 2016 election, an American Research Group study found that…

Rasmussen Reports had the highest accuracy among 25 pollsters in the 2016 election.

CNN was so shamed by their accuracy over its pathetic, completely off-the-mark disaster on Election Night, that they have attempted to discredit in an article in 2017.  But results speak for themselves – when an organization is correct, the one that is so terribly incorrect doesn’t have an argument.

Stick that in your pipe and smoke it, Jake Tapper.  Or whatever you leftists do for fun.