Posted on January 20, 2021 by Shawn Jorgensen Leave a comment

On January 7, 2021, we got a small glimpse of what the upcoming session of the US Congress will be like, with wingnut liberals running the White House, the House and the Senate.

Now would be a really good time to get on your knees and pray for America.

But whatever you do, don’t say “Amen” around Nancy Pelosi, because that’s just intolerant, insensitive and sexist, you non-Liberal.

The US House of Representatives is governed by a set of rules, which are specific to each Congress and passed at the start of the legislative session.

Speaker of the House Nancy Pelosi and House Rules Committee Chair James McGovern unveiled the Rules of the 117th Congress on January 1, with several changes to previous rules.

One change was to “honor all gender identities by changing pronouns and familial relationships in the House Rules to be gender neutral.” 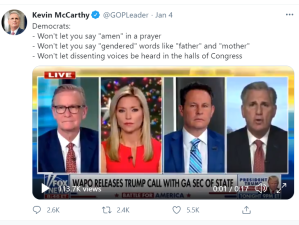 And once again, Liberal lunacy prevails in American politics.

The language change has prompted backlash from conservatives, such as House Minority Leader Kevin McCarthy, R-Calif., who claimed on Twitter:

It’s true that the Rules of the 117th Congress include changes to gendered language. But they don’t “ban” the terms from use in the House. The change only alters the text of Standing Rules, to strike gender-specific language and replace it with gender-neutral language.

However, it’s the thought – or in this case, the lack thereof – that counts.  And this is more than a “slippery slope” toward America’s descent into liberal idiocy.  This is greasing up the hill, so the ride ends sooner.

One victim of this nonsense is apparently the word “Amen”, which can no longer be used in the US Congress by the official chaplain or any other Congressmen or Senator, after Democrats introduced the “gender-neutral‬” language. 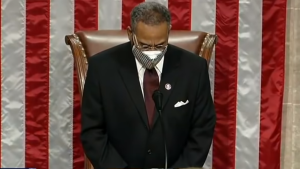 Just to show how idiotic it has become, Rep. Emanuel Cleaver, a Democrat from Missouri, made a rather unusual addition, while leading the House in a prayer during the swearing-in of the 117th Congress on Sunday.

Cleaver, who is an ordained minister, asked God to give the new Congress the strength to overcome selfishness, prejudice and ideology, and to heal the partisan divisions of 2020.  And he concluded with:

“We ask it in the name of the monotheistic God, Brahma, and (the) God known by many names, many different faiths, Amen, and Awomen.”

‎A pastor spewed that nonsense.  Let me say it again – this was from the mouth of a supposed Christian minister.

You have got to be kidding me.

By the way – this is probably a good time to put up a warning label here – Liberal stupidity is highly contagious.  And as far as I can tell, there is no cure.

Ok, LISTEN UP, Speaker Pelosi and Reverend Retard, you liberal nutbars: “AMEN” is Hebrew (as shown), and it means  “with certainty,” “truth,” “verily”, and ”so be it” – a declaration of agreement that the words spoken before it are truth without a doubt,. and the person saying “amen” agrees with same.

It doesn’t have anything to do with “a man” or women or gender or any other similar unrelated CRAP.

No one says “a men” or “a women”. Well, if your stage name is JPEGMAFIA, you just might. (Credit: Colors on Youtube)

No one EVER says “A men” or “a women” anyway – that would be using a plural noun with a singular article. Not even

“doze ‘Mericans who have axed me a hunned and fiddy times ‘bout chew Yanks being so stoopid, you shuddent give Bert to no chillens” (like this guy).

Oh, and Nancy…. may I call you Nancy?. (No?) Ok, so NANCY😏 this SON, BROTHER, UNCLE and kitty DADDY also thinks using gender-neutral-only language is a sign of mental retardation.  You don’t have the authority to actually rewrite the English language to suit your political sewage.

Here’s how to correctly use those words in a sentence:

“A MAN writing this article is suggesting that THE WOMAN Democrat Speaker of the US Congress is clearly as dumb as a box of hair. Many of THE MEN and THE WOMEN reading this article will likely agree .

If you do, shout it all together with me (men AND women alike)…

By Shawn Jorgensen,  Founding Editor
Calling Out Community
Posted:  February 6, 2021
[God’s Got A Plan For You!]