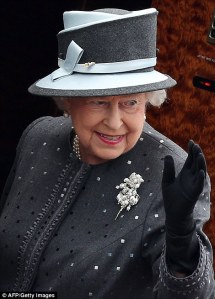 Queen Elizabeth II has become accustomed to countless milestones during her decades on the throne:

Yet, of all the various accomplishments and achievements in the 63-year reign of our Queen, perhaps none were as noble, symbolic and as highly impressive as her official visit this past Friday, June 26…

…to the infamous Nazi concentration camp at Bergen-Belsen in Germany. 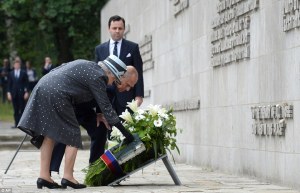 In a highly unusual and very symbolic move, Her Majesty and Prince Philip laid a wreath together at the memorial  of the camp, on the final day of her state visit to Germany.  She later met with several survivors of the camp, to hear their stories.  And we salute her today for doing that.

70 years ago this Spring, on April 15, 1945, British troops entered the first of several Nazi concentration camps at a place called Bergen-Belsen near Hanover, Germany – their first true glimpse of the Holocaust since the start of the War. Rumors about these camps had swirled since 1942 across Europe, but nothing could prepare the horrified soldiers who walked through the camp gates that day.

They soon discovered that the facility, built to hold 10,000 people, was filled to overflowing with nearly 60,000 critical ill and starving prisoners, amidst rotting piles containing over 13,000 unburied corpses.   The average weight of those still alive was 25-30 kg (50-60 pounds).   Sanitation facilities were designed for about 1/8 the number of people who lived there, and soon disease spread like wildfire.

The death toll at Bergen-Belsen was catastrophic.  Almost 20,000 Soviet prisoners of war and a further 50,000 ‘undesirable” prisoners died here – gypsies, homosexuals, those too sick to work at other prisoner of war camps, and thousands of evacuees from other death camps that were being overrun by Allied troops near the end of the war.

The death toll also included nearly 2,750 children.  One of them was a bright eyed 15-year old girl, who died of typhus along with her sister Margot in February or March 1945 at Bergen-Belsen – just two out of thousands in the camp that month.  Years later, her father (the only surviving member of her family) found her diaries of life in the Netherlands during the Nazi occupation, and felt it was a compelling enough story to approach a publisher with.  Het Achterhuis (The Diary of a Young Girl or The Diary of Anne Frank) has since been translated into 65 languages and has sold over 30 million copies around the world – and it remains a voice from the graves at Bergen-Belsen to our world to present day.

Nearly 20,000 of the camp’s prisoners died of typhus in the first few months of 1945, shortly before liberation.  A further 13,000 died after liberation – at a rate of nearly 500 a day – from disease and the effects of the Nazi-ordered severe malnutrition.  In fact, of the nearly 20,000 Jews alone that were transported to the camp, only around 2,560 were ever actually transported from Bergen-Belsen and released.

British military leadership, including Prime Minister Winston Churchill, were so enraged by what they saw, they ensured that photos of the atrocities were published in papers across the United Kingdom and around the world.  The photos shocked a society that couldn’t believe such inhumanity could exist. 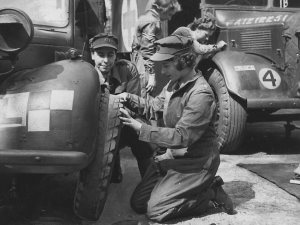 Though in some ways shielded from the horrors of the War, the Queen’s own family was a target of the Nazis, who felt there would be few greater  propaganda coups than to kill King George VI.  On the night of September 19, 1940, they nearly succeeded when a German Luftwaffe pilot dropped a bomb on Buckingham Palace, an event elevating the reluctant, stammering monarch to hero king in the eyes of the people.   And when she became of age, the 19-year old Princess Elizabeth enlisted to serve her country with the Women’s Auxiliary Territorial Service, training as a driver and mechanic and was promoted to honorary Junior Commander five months later.

For 63 years since, unaccustomed to public displays of emotion or embroiling herself in any type of controversial affair if possible, she has seen the rise of anti-Semitism again in Europe, and the Jewish race and the State of Israel being maligned in the press every day for contrived crimes against humanity.  Of course, there are always going to be those who somehow think that the Holocaust was a myth.  And just like those who faced the Nazi death camps of the 1940s, Jews worldwide once again face the prospects of another Holocaust at the hands of Hamas, the PLO, ISIS, the Arab League and other hostile nations, all who have one stated goal – the eradication of the Jews.

And into the midst of all that constant left wing hate-filled propaganda, a perfectly-coiffed, diminutive little 89-year old woman in her perfectly-tailored, beautiful black designer frock with matching shoes, hat, gloves and purses – with all the dignity and poise that she commands, slowly and deliberately walked with her 94-year old spouse up the long, lonely paved pathway to Bergen-Belsen…

… to walk with her head held high through the main gates of Hell itself. 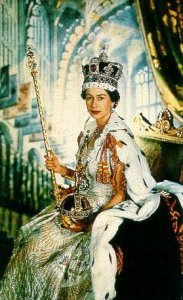 It matters that she was there.  It matters that this specific woman would recognize the horrors of the Holocaust, especially at this time in history, and the plight of its victims, including the millions of Jews who were butchered by the Nazis.  For she is not just some over-rated celebrity, some polarizing local political figure, or some has-been entertainer.

12 British Prime Ministers, 12 Presidents of the United States, 11 Canadian Prime Ministers, and 7 Papal Heads of the Catholic Church have come and gone during her 63-year reign.  She is Queen Elizabeth the Second of Great Britain, Ireland, Northern Ireland and the British Dominions beyond the Seas, Defender of the Faith, Head of the Commonwealth, Queen of Antigua, Australia, Barbuda, the Commonwealth of The Bahamas, Barbados, Belize, Canada, Grenada, Jamaica, New Zealand, Papua New Guinea. Saint Christopher and Nevis, Saint Lucia, Saint Vincent and the Grenadines,Solomon Islands, Tuvalu and of Her other Realms and Territories, Supreme Governor of the Church of England, and patron of 600 organizations and charities. 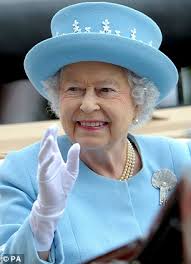 It matters that she was there.  And as our Queen left this ghastly place, after hearing from several of its survivors, she was overheard stating in hushed tones, “it’s difficult to imagine”.

We agree your Majesty – but we thank you from the bottom of our hearts for being there regardless.  You didn’t do it to be politically correct, because you’re swimming upstream if you did – the Holocaust is all but a distant memory.  There was no current anniversary to celebrate at the camp, no plaque to unveil, no tree to plant, no babies to kiss. thankfully no new buildings to dedicate there.  You went for one reason – because we should remember.   You didn’t have to go there – you’re 89, you could have taken a break from all the frenetic scheduling and put your royal feet up on your majestic ottoman in your palatial den.  But you didn’t.

That’s why one million people came to cheer for you as you stepped onto your Palace balcony on your Diamond Anniversary in 2012.  You have survived the outlandish treatment of the leftwing press for decades, political scandals, your own children’s marital problems, and the changing of the British Empire into the British Commonwealth.  All around you shifting sand, but you have remained steadfast.  You are the Elizabeth of World War II – you are the mechanic and driver doing her part for the effort.  We love you so much for keeping your promise as that young girl who stated to the world in a radio address on your 21st birthday:

I declare before you all that my whole life, whether it be long or short, shall be devoted to your service and the service of our great imperial family to which we all belong.’

You have kept a steady hand on this global ship for 6 decades, and your presence at Bergen-Belsen gave a stronger voice to the millions who died in the Holocaust.  You are also well aware that the rumblings of history are once again being felt against the Jewish race, and that it is the influence of powerful world leaders like yourself that can keep this from ever happening again.  Today, I applaud you, your Majesty, for standing up for what is right in a time when the world doesn’t know what that means anymore.

Thy choicest gifts in store On her be pleased to pour,
Long may she reign.
May she defend our laws, And ever give us cause,
To sing with heart and voice, God save the Queen.