One Officer Down Is Too Many

On Tuesday, June 17, 2015, thousands of police officers, including members of the Edmonton Police Service and fellow officers from other parts of Canada, the U.S. and even Great Britain, marched through the streets of Downtown Edmonton in a dramatic funeral procession from the Alberta Legislature to the Edmonton Convention Centre, where they said goodbye to one of their own, Constable Daniel Woodall. 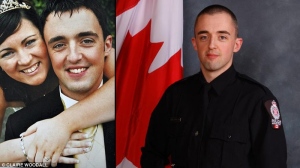 Constable Daniel Woodall, killed June 8 in the line of duty.

Constable Woodall, 35, was shot during a standoff in Callingwood (a west Edmonton neighbourhood near the famed West Edmonton Mall) on June 8, one of several officers attempting to arrest Norman Raddatz, 42, for criminal harassment.

As the officers attempted to enter the home near the intersection of 182nd Street and 62A Avenue, Raddatz opened fire from inside. Constable Woodall was struck several times and fatally wounded. A second constable was shot in the back but the round was stopped by his vest.

Black smoke billows from a house in Callingwood as officers block off the scene following a police shooting on Monday, June 8, 2015. (Credit: Paige Parsons/Edmonton Journal)/caption]

The home became engulfed in flames following the shooting and it is believed the subject died of a self-inflicted gunshot.  It’s since been reported that officers were pinned down by gun fire for over 10 minutes, after over 50 rounds had been fired.

The Constable is survived by his wife and two children, having relocated only 8 years before with his young family from Manchester, England for the express purpose of joining the Edmonton Police Service – thus why so many officers from Great Britain were in attendance at the funeral.

The Constable was the first officer with the Edmonton Police Service to die while on duty in 25 years. It brought back a flood of memories for me of the terrible day, June 25, 1990, when Constable Ezio Faraone, only 33, was killed.

Constable Ezio Faraone, who was killed June 25, 1990 in the line of duty in Edmonton.

That day seems so surreal now. I had been asked mid morning by the Administrator of the Bible College where I worked to take a bank deposit to the Royal Bank on 124 Street and 107 Avenue. As I walked into the first of two doors to enter the bank, I noticed a man standing just inside the second door with his back turned to me.

He was holding a rifle.

By some miracle I was able to tiptoe back out unnoticed. and ran next door to a little grocery store operated by a Mandarin-speaking couple. I was eventually able to convince them to let me borrow their phone to call the police (this was before cell phones!) and was advised that officers were already on their way – bank staff had tripped an alarm.

After they arrived, I spent the next 30-45 minutes giving statements to the police.  The suspects escaped while I was on the phone – the robbery had been botched. While I was safely in the bank talking to officers about what little I had seen, Constable Faraone was blocks away, discovering the getaway car of the fugitives in an alleyway around 124 Street and 118 Avenue. He saw only one suspect with the vehicle, however, and with his attention focused towards this suspect, a second man hidden from view in the backseat exited the vehicle and shot the 10-year veteran police officer in the chest, and he died almost instantly.

I know now that the man with the rifle had the ability to kill, but by divine providence and timing, I wasn’t noticed – but Officer Faraone gave his life for us that day, a real honest-to-goodness hero.  I often wonder, If the timing had changed by just minutes, would he still be alive today?  What if the robber had turned around as I was entering or exiting the bank?

We are very fortunate that our police officer deaths are so rare in Canada, and hit us so hard, that CBC National News covered the funeral procession and service live on its main network across Canada. In fact, the only other policeman violently killed in the line of duty this year in Canada was another Albertan, Constable David Wynn, 42, after responding to a report of a stolen car on January 16, 2015. 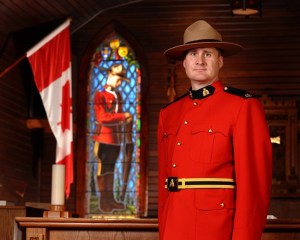 The RCMP officer and an unarmed auxiliary constable had responded to the Apex Casino in St. Albert (a suburb of Edmonton) at approximately 3:00 am. The two officers had just reviewed video of the car theft and were leaving the casino when they encountered the suspect – who drew a concealed handgun and shot Constable Wynn in the head and the auxiliary constable in the torso (the latter survived). He then fled the scene and committed suicide in a nearby vacant house. Constable Wynn was transported to a local hospital where he succumbed to the wound five days later. He is survived by his wife and three children.

In the United States, the statistics are extremely grim – there have already been 59 officers killed on duty so far in 2015 (to June 21) – and of those, 16 were killed by guns.  There have even been 10 police dogs killed in the line of duty already so far in 2015.  In fact, 3 U.S. police offers were killed this past week alone – as many as Canada has seen so far all year – and that remarkably represents a 27% reduction from the year before!

That’s insanity.  And sorry, gun control freaks- tougher gun laws and/or expanded registries wouldn’t have saved most of these guys, because criminals DON’T BOTHER to register weapons, obtain them on the black market, and/or steal them from law abiding citizens who do register them. 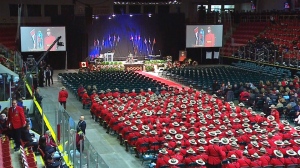 Thousands of police officers jam the main hall of the Edmonton Convention Centre for the Regimental Funeral for Constable Woodall in Edmonton – June 17, 2015

I thank God we live in such a land of freedom, free of such violence as our sister to the South suffers.  U.S. 24-hour news channels must share at least some of the blame for the instances of crimes against officers – they love to highlight every case of real or imagined police brutality, officer shootings of citizens, etc., making it open season for police in the United States.  I can’t count the number of times of late that an officer has had to shoot a citizen, and that particular racial community is up in arms over it – until you hear more about the person shot, and what a creep he was.  They bury that part of the story.

The tide is turning every day closer to anarchy in the United States, while the White House and Congress seem to be ignoring the problem, and/or using gun crimes as an excuse to illegal disarm Americans citizens who have a constititutional right to “bear arms”.  And American television’s portrayal of police officers are thugs, “pigs”, crooks and perverts disgusts me.  I personally believe the U.S. media is at least an accessory to most of these crimes, and that the vast majority of our of North American police officers live exemplary lives, and serve us with honor and distinction everyday.

No matter the criminally high number of American police officers that are dying in the line of duty, and no matter whether or not we have relatively low statistics in comparison, let’s be reminded that the death of EACH and every officer in Canada and the United States is…

…one death too many.

By Shawn J., Founding Editor
Calling Out Community
Posted June 21, 2015
We’d love to hear from you: