Mother Bear Pawed Through Syria – Why?

Russia marched and flew into the Syrian Civil War, set up shop and started bombing the heck out of ‘someone’, ‘somewhere’ and they then packed up, stating they had accomplished ‘something’.  Are we ever going to know what at least ‘some’ of those facts are?

Reuters broke the story 3 days ago that the Syrian opposition High Negotiations Committee (HNC) called on United Nations Secretary-General Ban Ki-moon on Thursday to launch an investigation into its accusations that Russia has repeatedly used air-delivered incendiary weapons in Syria. 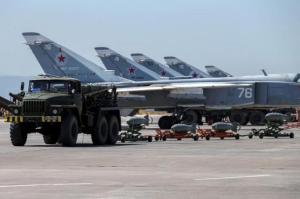 Russia deployed warplanes to Syria last year to support President Bashar al-Assad against rebels seeking to end his rule. A crackdown by Assad on pro-democracy protesters five years ago sparked a civil war and Islamic State militants have used the chaos to seize territory in Syria and Iraq.

“They have violated the Convention on Certain Conventional Weapons and breached international humanitarian law,” he wrote.

“MOTHER RUSSIA” – also known as The Bear, The Empire, or The Union of Soviet Socialist Republics. The West has always been suspicious of Russia’s motives – partly due to the fact that she never looked (nor do any nicknames sound) very motherly.

For one thing, as the recent conflict in Syria so aptly demonstrated, she can be and is an extremely brutal bully.

Yeltsin & Gorbachev at the breakup of the Soviet Union. (Credit: FindingDulcinea.com)

Underneath it all, the old mistrust and even fear of Russia has been reborn. The Soviet Union we saw under Mikhail Gorbachev and even Boris Yeltsin didn’t look, act or feel right when it was reborn as the Russian Federation – it didn’t quite pass the smell test.  After all, how could such a brutal Communist dictatorship just vanish, replaced by rainbows, unicorns and doves for so long, as we saw under Gorbachev?  Or in the case of Boris Yeltsin, in a bottle of vodka?  A dictator alone cannot rule a dictatorship of 11 time zones singularly – he must have hundreds of thousands of cruel dictatorial helpers. 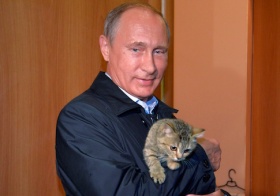 Russian President Vladimir Putin holds a cat as he inspects housing built for victims of wildfires in a  village in southeastern Siberia on Friday, Sept. 4, 2015. (Credit: Alexei Druzhinin/RIA-Novosti, Kremlin Pool Photo via AP)

Well, the Russia we knew wasn’t dead.  She was apparently just sleeping – and she was awakened under the steel-blue gaze of Russian President Vladimir Putin, a President of Russia we can understand and not relate to – just as it was with Brezhnev, Andropov, Kruschev and the rest of their ilk all the way back to Lenin and Stalin.  Putin gives you the impression that he will play with his kitten right now – but later tonight, he’ll burn your house down.

In all his years of rule, Putin never acted more like a Russian President normally does, than he did concerning the subject of Syria’s bloody 4-year Civil War.  The brutal war has left approx. 250,000 Syrians dead, as we reported well over a year ago:

“CNN reported that the death toll has doubled every year for the last several years:   ‘Since civil war broke out there, 310,000 people have been killed, the Syrian Observatory for Human Rights said Thursday. A year earlier, SOHR’s tally stood at 162,402. And the year before, the United Nations put the death toll at 70,000.’  According to the CNN report, this crisis is the equivalent of the complete emptying of Greater Boston and the displacement of its 7.5 million people, as well as the starvation of the entire population of Moscow, the capital of Russia.”

However, the real toll has been on the living – according to the United Nations High Commission on Refugees (UNHCR) website on the “Syrian Arab Republic”.  As of June 2015 they reported: 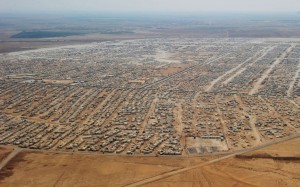 149,200 Iraqi refugees (which the UNHCR notes is a government figure for Iraqis living in Syria.  Why on earth would Iraqi refugees reside in Syria, next door neighbor or not, when it’s being bombed to smithereens in a Civil War?)

4,194,554 Syrian refugees, as of June 2015, living in mostly giant tent cities set up in the deserts of Jordan, Syrian areas not directly affected by bombing, etc.

160,000 “stateless” people, which UNHCR defines as:  “persons who are not considered as nationals by any State under the operation of its law. This category refers to persons who fall under the agency’s statelessness mandate because they are stateless according to this international definition, but data from some countries may also include persons with undetermined nationality”.  So what, they just refused to tell UNHCR where they are from then?  Hmmmm.

7,632,500 “internally displaced persons (IDPs)” – the true horror of this conflict, which UNHCR defines as: Persons who are displaced within their country and to whom UNHCR extends protection and assistance. It also includes people in IDP-like situations. For the most part, they simply have no home to go back to.

Total in need of United Nations assistance, of June 2015:

The city of Aleppo, formerly Syria’s second largest city, held nearly 2.3 million residents (2005) before the war.  Now, according to British newspaper the Guardian: 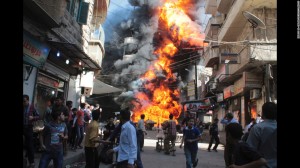 Residents run from a fire at a gasoline and oil shop in Aleppo. (Credit: CNN)

Those who remain in eastern Aleppo, roughly 40,000 from a prewar population estimated at about a million

[Aleppo proper – Aleppo metro is 2.3 million], have been without electricity or running water for more than a year.  [emphasis mine]  Now a bombed-out shell, with nearly a million displaced from their homes

– what the United Nations is now calling the largest refugee crisis in world history -Russia came into the fray, told everyone else to get the Hell out of the way – and everyone did. Then they declared their objectives met after pounding Syria with over 1000 airstrikes, and headed for home.

What Did Russia Accomplish in Syria?

“At least 1,505 people have been killed in Russian air strikes since they started in September 2015. We have documented their names and can say at least 346 of them were children and only at least 47 were fighters,” Bassam al-Ahmad, spokesperson for the Violations Documentation Centre in Syria (VDC), told Al Jazeera on Wednesday.

The VDC is an independent, non-governmental organization that has been monitoring the conflict in Syria since April 2011.

The UK-based Syrian Observatory for Human Rights put the death toll at 1,015, adding that 238 of those killed were children. The Observatory also said that at least 1,141 fighters had been killed, including fighters from the Islamic State of Iraq and the Levant (ISIL) group.”

And yet the Civil War isn’t even close to being finished yet, and ISIS is still alive and well. So what were they doing in Syria? And why such a high proportion of civilians?  We’ll likely never find out for sure.  And that’s thanks to the weak leadership of Barack Obama. 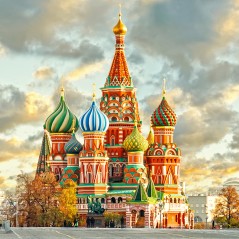 ©2014-2017 Calling Out Community A founding member of the Calling Out Community, RETRO RUSSIA, will show you the real heart of a nation so large, it spans 11 time zones and has 35 official regional languages. As the Iron Curtain is once again pulled across the face of Eastern Europe, they go "behind the veil" to share the real stories underlying Russia's extreme makeover - in hopes of finding out what Her real end game is. View all posts by retrorussia