Yesterday (Sunday, April 10) we brought you a very shocking story, through our partner blogger Islam Rising, that focused on the allegations of Muslim kids from Syrian families – as young as Grade 3 – that were attacking other children in a Halifax elementary schoolyard with chains, making hand gestures of decapitation and shouting pro-Islamic statements.

It was without a doubt one of the most-read stories we have ever had on the Calling Out Community site – in fact the #3 most-read story of all time out of more than 110 posts in the last year. We are particularly proud of the fact that we picked up on this story up to half a day before much bigger players did so.

The reactions were mostly favourable, minus that of one Muslim woman who had the gall to blame the reaction of the paper, after pulling the story without warning, as being the result of “poor journalism practices“:

You were partly correct. There is a newspaper strike into its 80+ day, and the article would have been written by a freelance author. However, that in no way affected the decisions made, nor was the writing of the article in any way the issue – it was the resulting editorial decisions (and accusations made against concerned citizens like ourselves) that we are now quite FURIOUS BEYOND WORDS ABOUT, and we are going to get even.

The paper posted a very revealing response today to the backlash created by stories like ours. What was offered was perhaps the worst piece of yellow journalism CRAP, which they considered their justification for retracting the story: 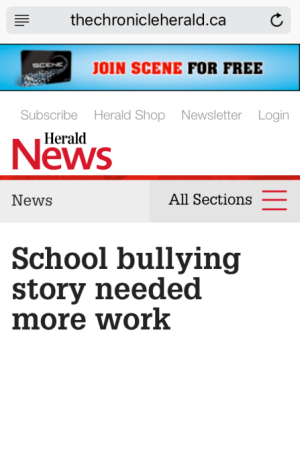 The Chronicle Herald published a story Saturday that has drawn the wrath of many of our readers, particularly online.

It was based on two parents’ allegations of physical bullying and threatening behaviour by some of the children who recently arrived with refugee families.

The school cited in the article, Chebucto Heights Elementary, has had an influx of new students in recent weeks.

The story quoted two mothers who didn’t want their names used for fear of reprisals against them or their children. A third person, a grandparent, was interviewed and had similar concerns.

Since the article ran, another family has contacted us with a similar complaint.

Bullying is a sensitive subject. So is the integration of newcomers, particularly those who have faced challenges, even trauma, on their way here.

Our story was incomplete and insufficiently corroborated, given the serious nature of the allegations.

Readers also rightly pointed out that the headline ‘Parents worried over school kids’ brutality’ was unfortunate. Using the word brutality to describe children, particularly of an identifiable cultural group, is problematic.

Reaction to the story was all over the map, from thoughtful to downright scary.

Many journalists called publishing the story irresponsible. Some parents weighed in on social media on the need for better discipline and more supports to help newcomers in our schools.

Appallingly, anti-Muslim groups with words like ‘crusade’ and ‘jihad’ in their names started sharing the article.

Since then, some readers have contacted us to object to the article’s removal.

Our concern is about more than reaction.

Social media is not a great place for the cautious, well-considered examination of problems. A newspaper ought to be. We should have done better and we will.

We’ll start by asking more questions and getting more answers.

We will also run letters and commentary. Please email us at letters@herald.ca.

Here’s our thoughts – 6 things to take away from this piece: 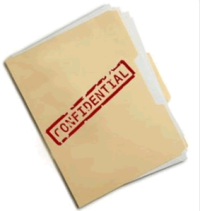 Apparently, in order for a source to be considered valid to this paper, they have to be publicly named? Is that a joke? One secret informant in 1972 brought down a sitting President (Nixon), sent several to jail, and earned the journalists a Pulitzer Prize after the Watergate scandal. Yet, apparently this paper thinks abused kids, terrified by little Islamic thugs already, need to also be exposed publicly for the audacity of criticizing the Muslim community.

The little Islamic thugs remain free and clear. There even seems to be some justification for their behavior. Notice the soft language used to describe them: they are called ‘newcomers’, ‘some of the children who recently arrived with refugee families’, ‘those who have faced challenges, even trauma, on their way here.’ Oh BOO HOO, poor little Mohamed. Don’t be upset that he choked your kid with a chain around his neck – cause he’s had a rough go. Right, and there are no abused kids in Halifax homes already? They should just shut up and take it?

Apparently two different families can complain about the same thing and it’s still not enough. WHOA!  Wait a minute – but isn’t the paper now admitting that parents or grandparents have come forward now from four different families with the same story? How many kids have to come forward before its considered a story? What’s your child abuse minimum, Halifax Chronicle Herald?  (Oh yes, by the way Herald Chronicle,  ignoring or worse, even justifying child on child attacks is a form of abuse too).

These kids are ISIS soldiers – brutality can be a learned behaviour at any age.

“Using the word ‘brutality’ to describe children, particularly of an identifiable cultural group, is problematic.”  Wow, I guess the cultural elite in Halifax don’t get out much.  Perhaps it’s best we don’t tell the sensitive little darlings at this paper that there are videos on YouTube of Palestinian 3 year olds singing “death to Israel” songs (yes, there actually are songs) while brandishing knives.  Little ISIS soldiers under 10 years of age are slicing people’s heads off in other video horrors.  Kids can be brutal if they are taught to be.   But apparently in Halifax, it’s not considered ‘brutality’ when kids choke other kids in Grade 3 with chains. An autistic kid is threatened with decapitation but that’s not brutal? Children are even told that “Muslims will conquer the world”.  And yet you believe that the only truly problematic part of this story is the fact that some thinking people called it “brutality”? 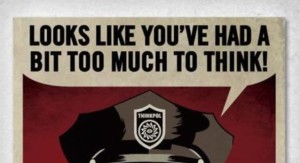 “Appallingly, anti-Muslim groups with words like ‘crusade’ and ‘jihad’ in their names started sharing the article.” And that is the reason, dear friends, why a newspaper deleted its own stories from its own site.  Because someone was sharing it.  Sorry, is that not a newspaper’s actual REASON FOR EXISTENCE?  And is it in fact not the ULTIMATE MARKETING PLAN of most news media outlets today to boldly share controversial stories without compromise, and to have people you don’t even like or agree with share that story with others?

We used to call that “promotion“.  Are left-wing media outlets today so insecure about their messages that they now try to decide who gets to even read them One wonders what the editors of this paper would do if they knew that people actually use their newspaper to dry newly-washed windows, soak up any urine the new puppy might dribble out, cover the bottom of the bird cage, or to use as lightweight packing material for boxing up shiome nuts.  My God, the Halifax paper would fold in a week (pardon the pun).  Let’s keep these revelations our little secret – the poor ‘journalistic’ darlings are apparently dealing with enough.

Protecting parents and their kids with warnings about a real threat to their safety is not relevant, I guess – nor apparently is it the lack of this protection on an elementary school playground  the fact that the editors found to be most appalling.

Protecting Muslim reputations is paramount, no matter what the cost to  journalistic integrity or credibility. Clearly Muslims forced them to take the story down – otherwise this newspaper just provided us with a copy of their suicide note.

So, on behalf of the people of Halifax who have depended on you for generations to tell the truth, the whole truth (the W-5 who, what, when, where, why and how), we ask this question of the editors:

Herald Chronicle,  you bluntly stopped readers from being able to access a controversial story on your site, simply because some folks had the audacity to share it.  Therefore, can you now define for us going forward – what the hell is your REASON FOR CONTINUED EXISTENCE?

This is an truly and incredibly bad example of total CENSORSHIP – from a newspaper of all places.  And we call “B.S.” on this nonsense about an identified “anti-Islamic’ group who would have the word Jihad in their name.  AND SO WHAT IF THEY DO? They have every right to free speech in this country, which one would have thought a newspaper would defend loudly and long.  The Herald-Chronicle has lost their way in this 80 day journalist’s strike I guess, as now they believe they are our den mother or hall monitor, not the provider of the news?

How people use the information a newspaper provides is quite frankly not a journalist’s main concern nor actually any of their business – telling the true story is their only task.

Since when does this paper suddenly feel the need to protect Islamic groups over all others?  How did Muslims suddenly manage to become the victims in this story – or in general?  We’re pre-supposing that anti-Israeli or pro-BDS groups can share this newspaper’s articles to their hearts content, and such actions won’t trigger story retractions from this site, because the stories themselves are often anti-Israel or pro-BDS.

It was hard to pick a winner, but in the end, we chose this sentence as our ultimate lame-ass  favorite: “Social media is not a great place for the cautious, well-considered examination of problems. A newspaper ought to be. We should have done better and we will”.

Well guess what ladies and gentleman? Apparently you’re too stupid to figure this stuff out yourself. Don’t be talking around the water cooler or your Twitter feed about thinge. The cultural elite will tell you exactly how to think.

Here’s our message to the Chronicle Herald – SCREW OFF. No one asked the you to give a “cautious well-considered examination” of anything. Tell the damn story – who, what, when, where and why. We can figure out what it means for us, thanks just the same.

Folks, forget what these idiots have to say. They gave up their right to be heard when they deleted their story.

If you want to know what’s really going on with this story, checkout the Rebel Media video. They have boots on the ground in Halifax and they have uncovered a shocking story that the cultural elite – and the Liberals – don’t want you to know. What else is new.