Vimy Ridge at 100: Canada Rises Up

A cadet stands in front of the National War Memorial in Ottawa during a ceremony to recognize 100 years since the Battle of Vimy Ridge. (Credit: Andrew Foote/CBC)

The steps of the National War Memorial in Ottawa were bathed in the glow of 3,598 candles on Saturday night, April 9, 2017 – each one lit to represent a Canadian soldier killed in the First World War Battle of Vimy Ridge.  Canadian Army Cadets then stood guard overnight at our capital city War Memorial to mark the 100th anniversary of Vimy Ridge, fought from April 9-12, 1917.

It seems fitting to include these young cadets in guard duty this week.  They would have been just like all the other boys too young to enlist in active duty as the Great War began.  Left behind while their older brothers, uncles, and fathers went to the fight on foreign fields, these cadets, in a very real sense, are a picture of Canada herself in 1917.

Though She was 49 years old at the time of this Battle, Canada’s first half century was marked by very little calamity.  That was all about to change on foreign battlefields with names like Ypres, Vimy Ridge, Passchendaele, and others. The horrors seen and sacrifices made in this Battle; the military tactical genius that Canada employed; and the bravery of the young men themselves, would lift Canada internationally from behind Her mother’s (Great Britain) apron to a new level of global respect and recognition, a nation that stands on her own, which Canada has built upon ever since.

The large regimental Celtic cross of the 15th Battalion (48th Highlanders) where it stood 100 years ago on the battlefield near Vimy Ridge. Although there were other wooden crosses fashioned by regimental carpenters, this is one of the very few to survive. (Credit: CBC)

As late as February 2017, you wouldn’t have to go further than a church basement in Toronto to view a historical artifact from the Battle of Vimy Ridge – a 100-year old wooden battlefield cross.

Regimental carpenters had pre-built and would quickly paint the names and erect these crosses right on the battlefield, a thankless job that became an art form in itself, as many hundreds of these crosses were erected on far too many bomb-scarred fields across western Europe.

The fact that this cross had survived for a century was a testament to how well it had been taken care of.  CBC reported that it had been transported across the Atlantic to France twice, but had always found its way back to its “temporary” 100-year home in Canada. 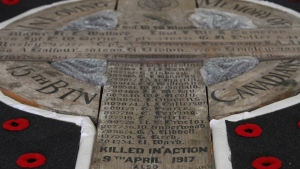 The cross was expertly packed for the voyage along with one poppy for every one of the 57 names etched on it. It will go on display this weekend at the newly opened Vimy Ridge visitor centre. (Credit: Nahlah Ayed/CBC)

Etched on its surface are the names of 57 Canadian soldiers, most from the 15th Battalion, and most of whom were killed in the first hours of that assault.  That makes it one of only a handful of surviving witnesses — and a real-time partial record — of the heavy Canadian losses in those pivotal opening moments of the battle.

The 15th Battalion was tasked with taking on the Eastern edge of the ridge, which meant advancing over a longer distance, and through more German lines than other Canadian units.

In fact, they expected such heavy casualties with this Battalion that they had actually pre-dug their graves before the battle even began.  They ended up with two sites where multiple Canadian troops from this Battalion were buried together, and each was given a cross.  This was one of those two handmade memorials.

In February 2017, for the first time in a century, and thanks to the Canadian Ministry of Veterans Affairs, this Celtic cross was flown across the Atlantic, where ministry officials were there to greet it and to transport it – if only temporarily, to the same spot where these people listed are actually buried. 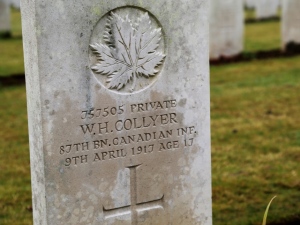 W.H. Collyer died at Vimy Ridge at 17. The legal age to join the Canadian army was 18, so he would have lied about his age in order to enter the fight. (Credit: CBC)

On the 100th Anniversary memorial weekend, and for the first time in 100 years, the cross was raised over the actual graves of those men for a limited time.

As dramatic as the story of this grave marker is, it will, of course, be overshadowed by the incredible size and beauty of the Canadian Vimy Ridge Memorial itself.   It is by far the most dramatic Canadian memorial to any cause on Earth.  At the time that it was being constructed, however, Vimy Ridge was not considered to be as important perhaps as we see it today.

The Vimy Memorial itself changed all that, designed by Canadian architect Walter Seymour Allward, and taking an astonishing 11 years to build.

“Canada Bereft” or “Mother Canada” is the largest statue at the front of the memorial and is said to depict “Canada mourning her fallen sons.” Its inscription reads:

“To the valour of their countrymen in the Great War and in memory of their sixty thousand dead this monument is raised by the people of Canada.”

It is often a quiet place, even when there are many visitors, as it really is a place of reflection. 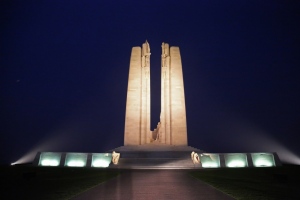 And Canada has much to reflect on.  In fact, I had a lump in my throat as I was writing a sentence. What those Canadian men and boys did, beginning in blinding rain and sleet, on that early Easter Monday morning 100 years ago, is still today looked at as being a marvel of modern warfare. 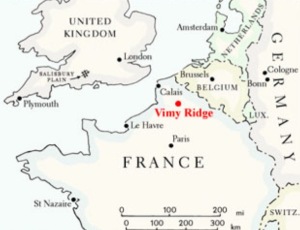 Situated in northern France, the heavily-fortified seven-kilometre ridge held a commanding view over the Allied lines. Anyone in the future who would be assaulting the Ridle over an open graveyard, since previous French attacks had failed –with over 100,000 casualties.

Canada was given this task next – and to be blunt, there was some mentality of Canadians being “cannon fodder” in this equation.  History shows that Canadian troops, when fighting as part of a larger British Empire force, were often thrown into the front lines of horrific battles, in order to risk less British lives.

Canadian troops go “over the wall” and into a great victory in Vimy Ridge on April 9, 1917. Troops took the Ridge in one day, suffering the greatest one-day loss of life in Canadian history. (Credit: Metro News)

All four divisions of the little Canadian Expeditionary Force  –  mostly volunteers – were brought together for the first time in Canada’s 49-year history to fight this Battle.  Including one British division, they numbered 170,000 troops – over 145,000 Canadians, virtually our entire Army at that time.

If we had lost – if Canada had failed on that Ridge – it would’ve been an unthinkable disaster for our nation, as we risked destroying our entire national Army.  I get angry just thinking about the risk our nation was asked to take.

To capture this difficult position, the Canadians would carefully plan and rehearse their attack.  To give them greater flexibility and firepower in battle,  specialist roles as machine-gunners, rifle-men and grenade-throwers underwent weeks of training behind the lines using models to represent the battlefield, and new maps were drawn up from aerial photographs to guide their way.

British-dug tunnels around the Vimo Ridge area. One still exists for tourists to explore to present day. (Credit: Wikipedia)

bring men forward safely for the assault, engineers dug deep tunnels from the rear to the front. Despite this training and preparation, the key to victory was a devastating artillery barrage that would crelate a moving wall of high explosives and shrapnel that forced the Germans to stay in their treaches and away from their machine-guns.

In the week leading up to the battle, Canadian and British artillery pounded the enemy positions on the ridge, using new artillery tactics that allowed the gunners to first target, then destroy enemy positions.  Canadians were given an almost limitless supply of artillery shells, which destroyed hardened defences and barbed wire.  The Canadian infantry would be well supported when it went into battle – with over 1,000 artillery pieces laying down withering, supportive fire.

Attacking together for the first time, the four Canadian divisions stormed the ridge at 5:30am on April 9, 1917. More than 15,000 Canadian infantry overran the Germans all along the front.  Incredible bravery and discipline allowed the infantry to continue moving forward under heavy fire, even when their officers were killed.

There were countless acts of sacrifice, as Canadians single-handedly charged machine-gun nests or forced the surrender of Germans in protective dugouts.  Hill 145, the highest and most important feature of the Ridge, and where the Vimy monument now stands, was captured in a case of bayonets versus German machine-gun positions.

It took there more days of costly battle to deliver the final victory. The Canadian operation was an important success, even if the larger British and French offensive, of which it had been a part, had failed. But it was victory at a heavy cost:  on top of the near 3,600 Canadians killed, more tHan 7,000 were wounded.

Prince Charles, the British Prince of Wales, said so dramatically and beautifully at the 100th Anniversary ceremony on April 9, 2017:

Prince Charles and sons Prince William and Prince Harry, visit one of the only still-accessible tunnels used by Canadian troops at Vimy Ridge. (Credit: Daily Mail)

“(The Canadians) succeeded in seizing the vital high ground of Vimy – a task in which many others before them had failed,” Prince Charles said.

“However, victory came at an unbearably heavy cost. This was, and remains, the single bloodiest day in Canadian military history. Yet Canadians displayed a strength of character and commitment to one another that is still evident today. They did not waver. This was Canada at its best. … ” [Emphasis mine]

More than just a memorial to one specific Battle and the nearly 3,600 soldiers who died there, Vimy Ridge became a national place of mourning for all soldiers of the Great War.  In fact, there are 11,285 names carved into the monument, all Canadians who died during the Great War but who have no known resting place. The names are those still found across Canada today.

The April 9, 2017 ceremony for the 100th anniversary of the Battle of Vimy Ridge was attended by more than 25,000 Canadians, with millions more Canadians estimated to be listening on the radio and over television.

To them, Canadian Prime Minister Justin Trudeau summarized the day:

“As I see the faces gathered here – veterans, soldiers, caregivers, so many young people – I can’t help but feel a torch is being passed,” Trudeau said in his speech. “One hundred years later, we must say this, together. And we must believe it: Never again.”