My blood boiled when I heard the story of a female welfare recipient in the state of Michigan who won $1 million in the local lottery, used some of the proceeds to buy a new house and car… yet continued to use a $200/month grocery card given to her previously by the state welfare office to buy food, because she thought she was still entitled – characterizing her new ownership of TWO homes as a “struggle”.

Even worse? She wasn’t the only (nor the richest) lottery millionaire in Michigan to get all that ‘lettuce’ – and still feel the need to accept ‘government cheese’ at the same time.  And believe it or not – it was all (for a time) perfectly legal

, even though citizens and government officials had a big ‘beef’ with it. 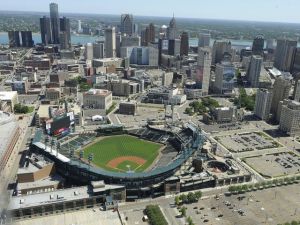 The people and city of Detroit, and greater Michigan in general, have been struggling terribly.  In the May 20,

In the May 20, 2016 issue of the Detroit Free Press, it was reported that back in 1940, thanks to the booming auto industry…

“…the city of Detroit was the fourth largest city in America – behind New York, Chicago, and Philadelphia.  At the city’s peak of 1.8 million people in 1950, it held 29% of the state’s population.” 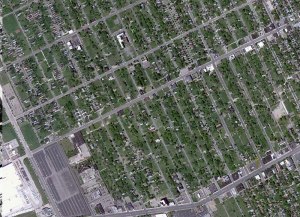 Jefferson Avenue, the same street as above, Detroit 2010 (Credit: DetroitUrbex.com)

This small decline was enough to drop the city to 21st in the nation, now surpassed in size by Seattle, Denver and El Paso, Texas. The last time Detroit had so few residents… was 1850.

That’s right, 1850.  10 years before Abraham Lincoln became president, and 15 years before the end of the Civil War.  53 years before Henry Ford sold the first mass-produced car in the world, his Detroit-built Model A, to Chicago dentist Ernest Pfennig on July 23, 1903.

How the mighty have fallen.  Since 1950, the height of Detroit’s population, NewGeography.com states that it lost 63.3% of its residents.  The near-death of the Detroit auto industry has meant the near-death of a once great city.

In 1950, thanks to the giant Ford, Chrysler, General Motors and other automobile factories in the area, Detroit was the fastest growing city in the world. In the past decade, thanks to the closing of nearly all of those plants (and the related jobs moving to China and Mexico, for example), it has been the fastest shrinking city in America.

Why do I bring it up? Because the dramatic shift in population means the State has lost a substantial number of union-paid, higher tax-paying citizens.  The State economy is clearly in trouble:

When people refer to the Michigan welfare system, they’re typically talking about two types of assistance: the Food Assistance Program and the Family Independence Program. About 132,000 people currently get food assistance with a “Bridge” card, which is automatically reloaded with $200 per month to purchase food items.

Knowing what you now know of Michigan’s financial meltdown, would it infuriate you to learn that in the midst of this – one of those food assistance recipients, caught on video buying $200 in groceries with a Bridge card, was a young woman that locals recognized immediately…

…As a new millionaire from the Michigan State lottery. 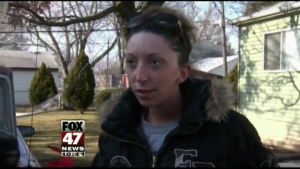 24-year-old Amanda Clayton won the $1 million prize in the Michigan ‘Make Me Rich’ lottery game – and after claiming the $700,000 lump sum amount, and paying the related taxes, she received $500,000.  She bought a new house and a new car with her winnings.

A woman working at her local grocery store recognized her right away during a recent visit, and couldn’t believe it when she pulled out a Bridge card to pay for her groceries, immediately calling the local news to tip them off.  When confronted later at her home by an anchor with Fox 47 news, Clayton was still unloading her $200 in welfare-purchased groceries, and had this to say:

“Well, I thought that they would cut me off  but since they didn’t, I thought maybe it was OK because I’m not working. “

When it was pointed out to her that she may not need to work now that she was a lottery millionaire – and even after she was advised that Fox 47 had learned she now owned two homes, including one that she had purchased recently in cash, along with a new car – her justifications continued.  Incredibly, she said that she was still “struggling” – she hadn’t taken the $1 million prize, having “only” received about $500,000 after tax.  Considering how low house prices are in the region, she likely still had hundreds of thousands of dollars in the bank after the home and car were purchased.

She was justifiably charged by Michigan Attorney General Bill Schuette with felony welfare fraud and was sentenced to nine months of probation in late July.  USA Today reported that she was also ordered to repay the roughly $5,500 in food and medical assistance she received after winning the lottery.

2 months later, in September, she was found dead of an apparent drug overdose.  This may sound harsh, but I’ll bet you her new house and car that the amount she owed Michigan state taxpayers went up her nose or in her arm instead.

Want to know another shocker?   She was actually the second millionaire lottery winner who had been caught on welfare in Michigan.  And she wasn’t even close to being the richest.

Leroy Flick in a 2012 court appearance, for reasons that may (not) be a surprise. (Credit: Mlive.com)

In 2011, Leroy Fick won it pretty big, claiming $2 million in Michigan’s “Make Me Rich” game – the same one that Clayton above had won more recently.

His story is even more bizarre.  With the $850,000 he took home after taxes, the 59-year-old used his winnings to buy a new home and a used Audi convertible.

But to buy groceries, the lottery winner was still using his Bridge card.  Remember, this is Michigan’s version of the food stamp program, which currently has over 47 million Americans enrolled across the nation.

Even worse? It was perfectly legal for the on-paper millionaire to ask taxpayers to buy his Kraft Dinner. “He’s not trying to cheat the state,” said Fick’s attorney, John Wilson. “Based on his income, he’s eligible.”

In fact, Fick contacted Michigan’s Department of Human Services after his lottery win to ask if he could still use his Bridge Card.  “They said I could go ahead and keep the Bridge Card if I wanted to,” said Fick.

“He specifically called the Department of Human Services and said, ‘Can I still use the Bridge Card?’ and they said, ‘Yes,’ because he is eligible,” said attorney Wilson. “He’s done everything right in the eyes of the law.”

Not in the eyes of the public, however, nor of the state Attorney General, who fought for 11 months to change various federal and state laws to shut down his welfare loophole.  All the while, he continued on social assistance – while living in his new home and driving his Audi convertible around the area.

What was the loophole?  Well, thanks to Obama in 2011, and his changes to federal guidelines that base eligibility for food stamps solely on income, Michigan followed suit. Fick’s attorney said his client is unemployed and lives on Social Security disability benefits, so his income qualifies him for the Bridge Card.

The $850,000 lump sum lottery payment is considered an asset, not income. So, under state policy, Fick could legally get food stamps – even if he has hundreds of thousands of dollars in the bank.

Thank you, President Obama, and thank you Michigan, for yet again highlighting that Libtards and those who support them must be morally, ethically and sometimes even mentally challenged.  Also, a great reminder that the welfare system in America has a lot of dead weight in it, as well as (to coin a Cher song), still far too many ‘Gypsies, Tramps and Thieves’.

(P.S. Calm down Cher, you and your celebrity wingnut friends voted for these idiots in the first place.  It’ll take President Trump 8 years to clean up this mess.)

By Shawn J., Founding Editor
Calling Out Community
Posted May 1, 2017