UK newspapers The Guardian, The Independent, and the Sun, and many other European news services are reporting today that the Russian Federation has just completed the largest military drill by their armed forces in their entire history.   American news bureaus have been largely silent on the matter.

The Russians have made no secret of it – international journalists were invited to witness the event.  However, when news sources like ABC News did bother to report on it, they didn’t even mention that thousands of Chinese soldiers also marched with Russia, side by side, for the first time in history.  Nor was it specifically mentioned in America that the war games commenced … on the 17th anniversary of the September 11 terrorist attacks in the United States.  Was that a coincidence?  Not a chance.

Russia is constantly stoking fears amongst its citizens with the spectre of a possible NATO attack on its soil.  Doing so, they have justified the most unbelievable examples of human emergency preparedness in world history – you’ll recall we reported almost exactly 2 years ago, on October 5, 2016, that the Russians somehow were able to hold mock nuclear attack drills with 40 million people – and had previously held a drill with over 60 million people previously.  The logistics of such a massive-scale movement of people is hard to imagine – perhaps even hard to believe.  It should be noted that NO independent confirmations of these huge drills were ever made.

But the scale and scope of the “war games”, being held for 5 days this week, were hard to miss, as international journalists from around the world were invited to come and witness them firsthand.  Oddly, most American news agencies were completely silent on the story.
The three largest branches of the Russian armed forces participated:

The West should be highly concerned that Chinese and Mongolian service personnel will also be involved in the “Vostok 2018” drills, set to include “massive” mock airstrikes and the testing of cruise missile defence systems.  Chinese personnel included:

This is the first time that the Chinese and Russians have held such massive joint military exercises in their entire histories, and it represents a significant geo-political shift in the region.

To put this into perspective, The Sun reported that: 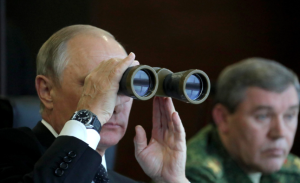 Moscow said the exercises – the largest since 1981 – were purely “defensive in character”.

Ahead of the drills, Russian President Vladimir Putin met his Chinese counterpart Xi Jinping in the eastern city of Vladivostok and told him the two countries relations were based on trust “in the sphere of politics, security and defence”.

“It sends a very strong message to China, saying that Russia doesn’t see China as an adversary or a military threat any more,” said analyst Alexander Gabuev, an expert in Russia-China relations at the Carnegie Institute in Moscow.

The most intensive part of the exercises will take place about 90 miles from the Chinese and Mongolian borders, where the two nations’ forces will practice against Russian formations.

The huge exercises will be spread across five army training grounds and four airbases.

Meanwhile, news in the United States continues to center around Hurricane Florence, which was built up all week as a category 4 hurricane, only to piddle onto the US East Coast as a category 2 storm – with wind speeds that we have often seen on the Canadian Prairies.  It was a non-story that may just have been a diversion from something much more ominous.  But at least now you know what’s really going on out there.

By Retro Russia, Founding Blog Member
Calling Out Community
Posted September 13, 2018
[God’s Got A Plan For You!]