In my original posting on August 19 (below), I made the rather blunt assertion that Erin O’Toole is not really a conservative, though he is the Conservative Party of Canada leader.

I have since re-thought that claim, and realize that I have committed the same faux pas that the Liberal media in Canada make.  Mine was innocent – their motivations, in attempting to stir up inner-Party strife, are much more obvious and insidious.

By asserting that O’Toole must be a social conservative, in order to be worthy of this Party’s leadership, I missed the mark completely.  I have written other articles about what Conservatism in the world means today – and I do believe we must operate under a much larger, more inclusive tent, to have any hope of gaining traction in this country or any other.  My old-school belief that social Conservative values will win the day in Canada is equally flawed.

I do find Erin O’Toole’s stand on abortion to be repugnant – but Justin Trudeau is infinitely more so.  In every conceivable way.  O’Toole represents the only hope conservatives in Canada have of forming government at the moment, and/or of defeating the Liberals.   As a card-carrying member of the Party, I choose to stand behind them.

I also asserted that O’Toole was not a fiscal conservative, by making big spending promises during campaign 2020.  That was also in error, as those promises do not bring with them the spectre of bigger government or more intrusion into the lives of the individual – which would be clear indicators that they are of the liberal var

Whenever Conservative Party of Canada Leader Erin O’Toole speaks on any subject lately, I find myself hanging on every word he says  – mostly to try to keep them from getting loose, until he actually starts to sound conservative.

Whenever I openly oppose some stupid thing he’s said, some respected fellow social conservatives will start pearl-clutching, and breathlessly panting into paper bags, begging  (or lecturing) me to “hold my nose”, vote for the “Devil I know, versus the Devil I don’t”., and remember that the alternative – “4 more years of Trudeau’ – is (shudder) more horrifying than Canada can bear.

First off, I’m not coordinated enough to hold my nose and vote at the same time.  and I can’t stress enough, friends, that breathing is a rather under-rated necessity in the voting process.  And get real – Trudeau is the Devil I know, and I’d already vote for a box of hair before I’d vote for that imbecile.   Erin O’Toole, however, is the Devil I don’t know – and frankly, I’m increasingly OK with that.

I  must ask, however, if there’s some concern about Mr. O’Toole’s blood oxygen level being dangerously low?  Otherwise, by what possible stretch of the imagination does he claim to be a “true blue” conservative?   Social conservatives in Canada need to take it down a thousand. – How would O’Toole make a better Prime Minister than Trudeau?   By almost every conceivable policy comparison, he IS Trudeau.

The headline on MSN News practically punched me in the throat tonight (August 18, 2021): 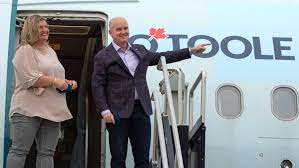 Even the most basic high school French is enough to help most Canadians read between the lines:

“Je suis pro-choix”
is
“I am pro-choice”

As a 3-year, paid-up, card-carrying member of the so-caled Conservative Party of Canada, I have become increasingly aware that almost no one in that Party has any idea what a “conservative” actually is.  So here’s a quick definition.

Let’s see how he does in comparison, by looking at the first two parts of that paragraph below:

Conservatives release full platform promising billions of dollars in new pandemic aid (CBC, August 16, 2021):  “The Conservative Party of Canada today released its full 160-page election platform — an ambitious agenda that promises billions of dollars in new spending to prop up an economy ravaged by the COVID-19 pandemic.  Unlike past Conservative platforms, this one embraces a robust role for government in the economy through large cash injections to help businesses weather the pandemic crisis over the next two years.  The multi-billion dollar plan has not yet been costed; the party says the Parliamentary Budget Officer (PBO) has not finished studying the numbers.”

FAILED – can’t be defined as fiscal conservatives then

Abortion issue is off the table as Conservatives launch pre-election policy convention (CBC: March 18, 2021): “But efforts by the Campaign Life Coalition — a well-organized anti-abortion group that backed social conservatives like Derek Sloan and Leslyn Lewis in the last leadership race — failed to put at least one anti-abortion policy proposal before delegates.”

FAILED – can’t be defined as social  conservatives then either

Progressive Conservatives.  In other words – Liberals

And this is not just happening federally.  Yesterday (August 17, 2021), the province of Nova Scotia went to the polls, and they elected a “Progressive Conservative” government, which I noticed, they introduced by the full title on several occasions.  He was not just called “Conservative” by any media outlet.  I don’t think that was an accident.  For you read what he was promising the electorate – and I am a bit confused as to what part of him was actually conservative:

Tories surge to upset majority win in N.S. election with a campaign focused on health (CTV News: August 18, 2021): “Nova Scotia’s Progressive Conservatives surged to an upset election win Tuesday over the governing Liberals after capitalizing on their main opponent’s early stumbles and promising a big-spending fix to the troubled health system.  During the campaign, Tory Leader Tim Houston unveiled a left-leaning platform that promised hundreds of millions of dollars in the first year of the party’s mandate to increase the number of family doctors, bolster the mental health system and create more nursing home beds.”

I can no longer in good conscience continue to ignore the side issues of the Conservatives and vote for them simply because they are currently the most viable alternative to the Liberals.  That’s just not enough incentive, I’m afraid – because they are no different than the Liberals, in my opinion.  And any attempts to romanticize the current Party based on some past term glory years is completely off the mark.

Canada absolutely has earned this kind of disastrous leadership. Canada deserves to be led by one of these pathetic morons.

Conservative Party of Canada leader Andrew Scheer announces his immigration policy at an event hall in Toronto, Tuesday, May 28, 2019. (THE CANADIAN PRESS/Cole Burston)

The Conservative Party shafted Andrew Scheer after he did everything but win the 2019 election campaign flat out:

And the party FIRED him for it. Not because he LOST the election, because he didn’t, by most performance standards.

It’s because he was TOO CONSERVATIVE for them. The Red Tories of the Party staged a coup, basically, and got rid of him.  And now they replaced him with this lame duck who isn’t polling anywhere near where Scheer was before the election in 2019.

Take these two polls, for example – exactly two years apart – showing Scheer was tied with Trudeau on August 16, 2019, and this week of August 16, 2021, where O’Toole is nowhere near Trudeau’s current level.

Those polls prove that Canadians are not afraid of Conservative values or ideals.  What they can’t stand is a leader that doesn’t stand for anything, even the principles that made his Party what it is today.

But he literally won the election based on those beliefs. It was only because of the highly suspicious results from Toronto and Ottawa, where Trudeau had 49% and 46% of the vote respectively, but took 88% and 85% of those city’s seats, that he was able to secure the seats to win a minority.

IThe media later called it an “efficient vote” for the Liberals, the media said. Trudeau never did an efficient thing in his life. GET REAL.  And he won the election, with the lowest popular vote percentage for a sitting government in Canadian history.

I don’t think that was a FLUKE.

I think that was somehow a FRAUD.

On a local level, if our Conservative MP, Mel Arnold​, is also an abortion supporter, he will never see my vote again. I will actively campaign against that old fart.  He is already on record supporting an amendment to euthanasia laws earlier in the year, supporting the Liberal government’s plans to expand the definition of euthanasia’s realm of legality.  So outrageous.

I’m not sure where my vote is going to land, but it’s not landing on the Conservatives by default anymore – for the first time since the Canadian Alliance merged with the old Progressive Conservatives to form the current Conservative Party of Canada.  This is a party with a rich history under men like Sir John A. MacDonald, John Diefenbaker, Brian Mulroney, and Stephen Harper.

Liberals think they have the right to rule, and Conservatives have bought into that nonsense.

It’s time the Conservatives in Canada stop acting like they are doing something wrong, simply by existing.  Liberals will always want to shut us up – we are the only ones standing in their way.

By Shawn Jorgensen, Founder,
Calling Out Community
Posted: August 19, 2021
[God’s Got A Plan For You!]